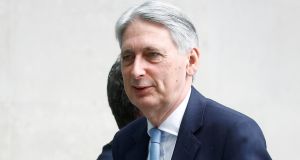 British chancellor of the exchequer Philip Hammond has become the second British cabinet minister to announce they will quit the UK government if Boris Johnson becomes prime minister.

Mr Hammond, who has been in Number 11 for three years, has been a vocal critic of a no-deal Brexit — something the Tory leadership frontrunner has vowed to do if he cannot secure changes to the Withdrawal Agreement.

Asked on the BBC One’s Andrew Marr show if he thought he would be sacked, Mr Hammond said: “No, I’m sure I’m not going to be sacked because I’m going to resign before we get to that point.

“Assuming that Boris Johnson becomes the next prime minister, I understand that his conditions for serving in his government would include accepting a no-deal exit on the 31st October, and it’s not something that I could ever sign up to.

“It’s very important that the prime minister is able to have a chancellor who is closely aligned with him in terms of policy, and I therefore intend to resign to Theresa May before she goes to the palace to tender her own resignation on Wednesday.”

It comes after justice secretary David Gauke — a former Remainer — told the Sunday Times he would also quit on Wednesday if Mr Johnson enters Number 10.

Mr Gauke said: “Given that I’ve been in the Cabinet since Theresa May came to power, I think the appropriate thing is for me to resign to her.”–PA