Major US airlines to end discounts for NRA members 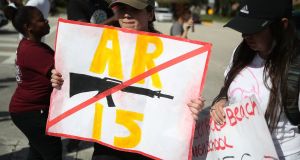 Students arrive at Marjory Stoneman Douglas High School in support of the victims of the mass shooting on campus in Parkland, Florida. Photograph: Joe Raedle/Getty Images

United and Delta airlines have both said they will end discount programmes with members of the National Rifle Association (NRA), following the second-deadliest shooting at a public school in US history.

The attack which killed 17 at a high school in Parkland, Florida, has pushed companies to re-evaluate their ties to the NRA.

Delta and United, two of America’s largest passenger carriers, said on Saturday they would back away from the group.

Delta said in a statement it was “ending its contract for discounted rates through our group travel program,” and having its information removed from the group’s website.

United is notifying the NRA that we will no longer offer a discounted rate to their annual meeting and we are asking that the NRA remove our information from their website.

On Thursday, First National Bank of Omaha said it would not renew a contract with the organisation to issue an NRA-branded Visa card.

Separately, the world’s largest asset manager BlackRock Inc - which holds stakes in gunmakers Sturm Ruger & Company Inc and American Outdoor Brands Corp - said it would speak with weapons makers and distributors to understand their response to the shooting.

Dozens of students and parents from the Florida high school lobbied for a ban on assault-style rifles, after the incident. - Reuters