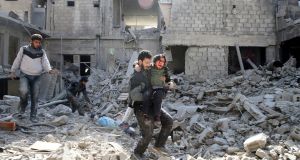 A Syrian man carries an injured boy as he walks on rubble of damaged buildings in the rebel-held besieged town of Hamouriyeh, eastern Ghouta. Over 300 people have been killed in the last four days. Photograph: Reuters

Russia has called for a UN Security Council meeting to be convened on Thursday to discuss the crisis in the besieged Damascus suburb of eastern Ghouta, as the death toll climbed higher on Wednesday under continuing bombardment by the forces of Syrian president Bashar al-Assad.

Russian UN ambassador Vassily Nebenzia said that an open meeting at the security council would enable the sides to “present their vision, their understanding of the situation and come up with ways of getting out of this situation”.

Four days of intensive bombing have left at least 310 people dead and 1,550 injured in the enclave, according to the Britain-based Syrian Observatory for Human Rights war monitor.

Russia, which entered the almost eight-year war on the side of Mr Assad in September 2015, dismissed as “groundless” accusations of involvement by its air force in the strikes on eastern Ghouta, which has been under the control of anti-government forces and radical fundamentalists, including al-Qaeda’s local affiliate, since 2012.

The Russian military said on Wednesday night that talks to try to peacefully resolve the situation in eastern Ghouta had broken down and that rebels there had ignored calls to cease resistance and lay down their arms.

In a statement, it also accused the rebels of preventing civilians from leaving the conflict zone. “A critical humanitarian and socio-economic situation is developing in eastern Ghouta,” the statement by Russia’s ceasefire monitoring centre said.

Although the casualty toll in eastern Ghouta decreased dramatically on Wednesday, the wave of attacks is the bloodiest in the region since unrest erupted in Syria in March 2011.

United Nations secretary general António Guterres said he was “deeply alarmed” by the escalation in violence and urged immediate suspension of “all war activities” in the Damascus countryside, where 400,000 people are residing “in hell on earth”.

He told the security council that “this is a human tragedy that is unfolding in front of our eyes and I don’t think we can let things go on in this horrendous way.” Mr Guterres said that Sweden and Kuwait have drafted a resolution for council consideration calling for a 30-day ceasefire.

French president Emmanuel Macron said that Paris “vigorously” condemned the bombardment. “The [Syrian] regime and some of its allies have decided to target civilian populations, and presumably some of its opponents,” he said. Mr Macron called for a “truce” to provide for the evacuation of civilians, humanitarian access to the enclave “as soon as possible”, and a security council resolution to call for an end to the spike in fighting.

The International Committee of the Red Cross and other aid agencies urged restraint and demanded prompt access to the wounded. The hospital in Douma, the largest town in the enclave, was overwhelmed with casualties.

Separately on Wednesday, in the northwestern region of Afrin, pro-government “popular” forces continued to reinforce Kurdish militiamen as the Turkish army and its Syrian allies continued their efforts to drive the Kurds from the strategic border zone.

A convoy of 20 vehicles carrying dozens of national guardsmen braved Turkish warning fire to enter the enclave on Tuesday at the request of the Kurdish Protection Units, which are regarded by Ankara as an extension of the outlawed Turkish Kurdish Workers’ Party.

Turkey said it would regard any group that aids the Kurds in Afrin as “a legitimate target”, risking a confrontation not only with Damascus, but also with its allies, Russia and Iran.