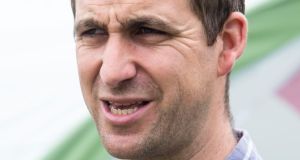 Brendan Cox has stepped down from his posts at two charities after allegations that he assaulted a woman at Harvard University in 2015. Photograph: Danny Lawson/PA Wire

The husband of the murdered MP Jo Cox has resigned from the two charities he set up in her memory after being publicly accused of sexual assault.

Brendan Cox has stepped down from his posts at More in Common and the Jo Cox Foundation after allegations, published by the Mail on Sunday, that he assaulted a woman in her 30s at Harvard University in 2015. Police filed her complaint as assault and battery, but action against him was dropped.

Mr Cox denied the claims in a statement issued on Saturday, but admitted making mistakes in a previous role with the charity Save the Children.

“I want to apologise deeply and unreservedly for my past behaviour and for the hurt and offence that I have caused,” he said in the statement. “In the aftermath of Jo’s murder, I promised that I would dedicate my life to two things, firstly loving and protecting our children and secondly fighting the hatred that killed Jo.

“In the last few days allegations from several years ago have resurfaced that makes concentrating on both of those tasks much more difficult. For that reason, while away over half-term, I decided to step down from my current public roles for the time being.”

Jo Cox was shot and stabbed outside her constituency office in West Yorkshire by a far-right extremist during the European Union referendum campaign in June 2016.

In the statement, Mr Cox said: “While I do not accept the allegations contained in the 2015 complaint to the police in Cambridge, Massachusetts, I do acknowledge and understand that during my time at Save the Children I made mistakes.”

Mr Cox, who married his wife in 2009, was reported to police in Massachusetts in the US in 2015 for inappropriate touching while on a trip to Harvard. A woman alleged he had bought her drinks, grabbed her hips and and forced his thumb into her mouth in a sexual manner, the Mail on Sunday reported. Mr Cox denied the accusations and called some of the allegations against him a “massive exaggeration”.

Jo Cox’s sister Kim Leadbeater said in a statement on Sunday that it was another very difficult day for the family but that they would support Mr Cox. “My priority is and always will be looking after Jo and Brendan’s children and supporting my parents, who have already been through so much,” she said. “As a family we will support Brendan as he endeavours to do the right thing by admitting mistakes he may have made in the past, and we respect him for doing so. We all make mistakes. Brendan is a wonderful father and I have no doubt about the happiness he brought to Jo.”

Leadbeater said she would also continue the work of More in Common and the Jo Cox Foundation. “I have a fantastic team of people who have supported me so far and I know they will continue to do so as we focus on creating a positive legacy for Jo,” she said.

The Mail on Sunday reported in 2015 that Mr Cox had stepped down from his position as chief strategist after allegations of “inappropriate behaviour” before a misconduct hearing.

Reflecting on his past behaviour in an interview with the newspaper, he apologised for any hurt and offence caused. “Certainly, I had too much to drink at times. I probably behaved in a way I thought was sort of jokey or flirtatious. I often wasn’t being serious, but that was perceived differently by others,” he said.

“There was never any malice, any intention to upset or offend people. But the bigger picture is that you do have to face up to how you make people feel, not just what your intention was. I didn’t reflect on it – that’s not a defence, it’s a failing. It’s not good enough.” – Guardian

The poor must not be punished: page 12