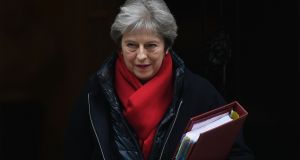 British prime minister Theresa May and her senior ministers met at Chequers in an attempt to agree a common position on Britain’s future relationship with the EU. Photograph: PA

Britain could face a bill of £5 billion in extra contributions to the European Union budget if it extends a post-Brexit transition period beyond the 21 months proposed by Brussels, MPs have warned.

The warning from the Commons European scrutiny committee came as Theresa May and her senior ministers met at Chequers in an attempt to agree a common position on Britain’s future relationship with the EU.

The committee said a longer transition period would take Britain into the EU’s next seven-year budget cycle. But because it would have already left the EU, Britain would have no say in how the money was spent.

Before the Chequers meeting began, the EU had already rejected what appeared to be Ms May’s preferred option of aligning fully with EU regulation in some areas, seeking regulatory equivalence for others, and ignoring EU regulations for a third group. In a 58-page document on post-Brexit trading options, the European Commission dismissed the idea of three regulatory baskets as cherry-picking.

“Preserving the integrity of the single market excludes sector-by-sector participation,” it said.

Brexit minister Robin Walker told MPs on Thursday that the commitment to maintain regulatory alignment on the island of Ireland, if no other way was found to avoid a hard border, did not mean Northern Ireland would have to adopt EU rules across the board.

“Even option C is focused on those areas which underpin North-South co-operation and have already been agreed by devolved government in Northern Ireland as areas of North-South co-operation, or indeed are coming under the Good Friday/Belfast Agreement. So I think this is very much where alignment needs to be maintained to maintain that existing relationship,” he said.

“It is not talking about full alignment, or taking EU rules across the board. It’s an important distinction to make. Also . . . we can look at full alignment as outcomes-based, rather than necessarily based on rule-taking.”

Ms May is expected to offer some details of her proposal for Britain’s future relationship with the EU in a speech towards the end of next week. Early next week, Jeremy Corbyn will make a speech about Labour’s policy in which he is expected to propose that Britain should remain in a customs union with the EU after Brexit.

Shadow chancellor John McDonnell said on Thursday that Labour’s policy had been “evolving” and that remaining in a customs union could help resolve the problems Brexit created for Northern Ireland. He insisted on the distinction between “a” customs union and “the” customs union.

Some Conservative rebels are backing an amendment to a trade Bill which would commit Britain to remaining in a customs union after Brexit. A change in Labour’s policy makes a defeat for the government on that amendment much more likely.

Pro-European Labour MPs want to remain in the single market as well as a customs union but Mr McDonnell said the party was still opposed to such a policy.

“We respect the referendum result and many people who voted for leave and others may not feel that’s respecting the result itself, because we have to adopt all the four freedoms,”  he said.

1 Chief medical officer urges people not to visit hardware stores
2 ‘When I look at the viral loads we find in elderly people, it is mind boggling’
3 Republic’s Coronavirus death toll rises by 28 as confirmed cases up by 500
4 Doctors sent to help at Cavan hospital after up to 70 staff infected with coronavirus
5 Coronavirus: Simon Harris expects restrictions to stay in place for weeks
Real news has value SUBSCRIBE