Kosovo calls for historic deal with Serbia amid independence celebrations 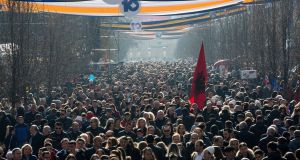 An Albanian flag is carried as thousands of people walk down the main pedestrian zone in Pristina, on Saturday, the 10th anniversary of Kosovo’s independence. Photograph: Visar Kryeziu/AP

Kosovo has urged Serbia to agree a historic deal this year to normalise their relations, as it celebrated its first decade of independence from Belgrade.

Officials said about 300,000 people gathered on Saturday in Kosovo’s capital, Pristina, for a homecoming concert by pop star Rita Ora, who performed after meeting survivors of the 1998-9 war between Kosovar rebels and Serbian forces.

Nato bombing of Serbia ended fighting that had killed about 13,000 people and displaced one million, the vast majority Kosovar Albanians, and after nine years of United Nations administration Kosovo formally broke from Belgrade.

Ireland is among 116 countries that recognise Kosovo’s sovereignty, but five EU states and Russia and China do not, siding with Serbia in a dispute that the European Union says must be settled before either Balkan state can enter the bloc.

Kosovo’s president, Hashim Thaci, said a deal with Serbia could bring an “unprecedented period in our common history, of good neighbourliness, of reconciliation and – why not – of friendship in a common European future.”

“We do not have time to lose,” he added, calling for a deal “this year” that would “be an extraordinary achievement for us, for the whole region, and for entire Europe”.

Serbian president Aleksandar Vucic has vowed never to recognise Kosovo’s independence, while also talking about the need to compromise in pursuit of EU membership.

Some of his allies have called for Kosovo to be divided, with northern, largely Serb-inhabited areas coming back under Belgrade’s control; another option could see Serbia allow Kosovo to join the United Nations and other international institutions without formally acknowledging its sovereignty.

“The people would decide; if you think that can get a majority, I’m not so sure,” Mr Vucic said on Friday.

“We have to look at today’s reality... and understand that it [Kosovo] is not ours as we taught ourselves, but neither is it theirs as they try to show it,” he told Reuters.

“If there is no compromise we will have a frozen conflict for decades. We should not leave that to our children to deal with.”

Marko Djuric, the head of the Serbian government office for Kosovo, said the independence celebrations were “actually marking 10 years since the destruction of the international law system”.

“Serbia will never recognise existence of another state on its own territory,” he added.

The concert by Pristina-born Ora – whose family left for Britain in 1991 as Serbia quashed Kosovo’s autonomy – was part of several days of celebrations.

“It’s been a long journey to get to this point and I think it’s just a start of an ongoing incredible journey for our country,” she said before her show in central Pristina.

Kosovo is struggling with poverty, unemployment and corruption, but could be poised to resolve a border dispute with Montenegro that has blocked its bid for visa-free travel to the EU. Deputies were due to debate and potentially vote on the deal on Sunday night.