Keith Byrne reunited with family after release from US prison 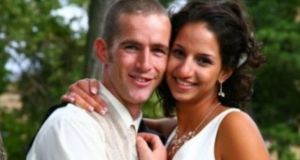 Keith Byrne and his wife Keran

Irish man Keith Byrne has been released from detention in the US and reunited with his family.

A US federal judge on Wednesday ordered the release of the 37-year-old Cork man, who is facing deportation from the US, from detention in Pennsylvania.

Lawyers representing Mr Byrne had filed a petition for a writ of habeas corpus in the federal court in Harrisburg.

According to a court order, issued by Chief Judge Christopher Conner, Mr Byrne will be temporarily released for a period of 30 days to allow him to seek judicial review of the decision to deny him legal status in the US.

However, the order states that “nothing…precludes the United States and ICE from redetaining Keith Byrne or reinstituting removal proceedings”.

Thomas Griffin, the immigration lawyer representing Mr Byrne, told the Irish Times that the legal team had won the first battle, and will continue to fight to allow him to remain in the US.

Mr Byrne was arrested by ICE (Immigration and Customs Enforcement) officials earlier this month having overstayed his ESTA visa waiver when he entered the country in 2007. He has since been refused residency because of two charges related to cannabis possession dating from his time in Ireland.

He is married to an American woman and they have three children, including his wife Keren’s son from a previous relationship.

Mr Byrne’s family have pleaded with authorities to permit the Fermoy native to remain in the US, noting that his family and business are based there.

He signed an application for an Irish passport last week in prison, prompting expectations that he could be deported imminently, but has remained in detention since then as his lawyers pursued various legal avenues. They have been arguing that Mr Byrne’s application for a green card had been handled incorrectly.

In legal filings lodged last week, Mr Griffin requested that authorities stop the imminent removal of Mr Byrne and allow him to make his case before an immigration judge.

Noting that Mr Byrne has had no dealings with police since arriving from Ireland in 2007, he said his client “has never been a danger to the community and he is not a national security risk”.

Noting the support in the local Philadelphia community for Mr Byrne, as well as the extensive media coverage internationally, Mr Griffin notes that Mr Byrne runs one of the best and most-well known residential and commercial painting companies in the greater Philadelphia area.

“Mr Byrne has consistently abided by the law, and has regularly paid business and personal taxes,” he writes.

He also notes that Mr Byrne’s family will likely lose their house in the event of deportation as the mortgage is more than half of Keren’s nursing salary.