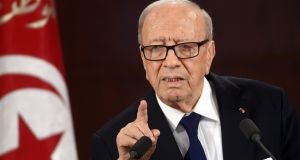 Tunisia’s 92-year-old president, Beji Caid Essebsi, who helped guide the North African country’s transition to democracy after a 2011 revolution, has died, the presidency said on Thursday.

A leading figure in the country’s fortunes since the “Arab Spring” uprising eight years ago, Essebsi was hospitalised late last month for a week after suffering what authorities described as a severe health crisis.

“On Thursday morning, the President of the Republic died at the military hospital in Tunis. The burial ceremony will be announced later,” a presidency statement said. The prime minister declared seven days of national mourning.

Tunisia’s foreign minister said a state funeral for Essebsi would be held on Saturday and the presidency urged Tunisians to unite and safeguard the nation’s present and future.

The country has been hit by occasional unrest over high unemployment and by several deadly Islamist militant attacks.

The speaker of parliament, Mohamed Ennaceur, said he would become the temporary president, in line with the constitution.

The next presidential election, hitherto set for November 17th, will now be held earlier, the electoral commission chief said, without elaborating. A parliamentary vote is set for October 6th.

The coming elections will be the third set of polls in which Tunisians have been able to vote freely since the 2011 revolution.

Essebsi rose to prominence after the overthrow of veteran autocrat Zine El-Abidine Ben Ali, which was followed by Arab Spring uprisings against authoritarian leaders across the Middle East, including in nearby Libya and Egypt.

Drafted in as premier in 2011 after Ben Ali was toppled, Essebsi was elected president three years later, becoming Tunisia’s first directly elected head of state. He founded one of the secular parties in Tunisia’s governing coalition.

“After the revolution, the president led the people to avoid confrontation, led the democratic transition and was keen to build and complete the constitutional institutions,” the presidency statement said.

Analyst Ibrahim Ouslati said the death of Essebsi, one of the world’s oldest leaders, was not likely to disrupt politics.

“I don’t think there will be any problem because Tunisians have a constitution that clearly shows that the speaker of the parliament occupies the position temporarily,” he said.

“Politically, there will be no problem. The political elite has enough awareness to manage it wisely like any democratic country.”

Tunisia has been hailed as the only democratic success of the Arab Spring uprisings, with a new constitution, free elections and a coalition government with secular and moderate Islamists in a region otherwise struggling with upheaval.

But political progress has not been matched by economic advances. Unemployment stands at about 15 per cent, up from 12 per cent in 2010, due to weak growth and low investment.

Essebsi’s death comes at a time of fresh attempts to replace dictatorships with democracy in the Middle East.

The armed forces of neighbouring Algeria and Sudan ousted long-serving rulers of those countries after mass protests. But it remains unclear whether greater freedoms will result.

Essebsi faced criticism, however, that he was seeking a return to a strong state with power concentrated in the presidency, whose role is limited to foreign and defence policies under the new constitution.

Critics also accused him of seeking a dynastic handover to his son and a retreat from post-revolution freedoms, and failing to support a truth commission seeking justice for the victims of authoritarian rule.

Essebsi, who served as a speaker of parliament under Ben Ali, denied all such accusations.

Tunisia has been spared much of the violence seen elsewhere in the Middle East since 2011, although it has been the target of militant Islamists over the years.

Government troops have been battling militant groups in remote areas near the border with Algeria, while high unemployment has also stoked disturbances in recent years. – Rueters