Updated: Vote Leave founder who was found in contempt of parliament for refusing to appear at Commons committee 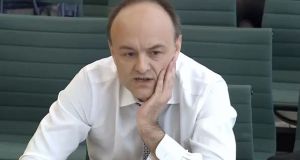 A video grab from footage broadcast by the UK parliament’s parliamentary recording unit shows Dominic Cummings, head of the Vote Leave campaign during the EU referendum, giving evidence to a session of the treasury committee. Photograph: Getty Images

Philip Hammond launched a strong attack on Boris Johnson's controversial right-hand man Dominic Cummings in a BBC radio interview early on Tuesday. The former foreign secretary and chancellor said: “I am going to defend my party against incomers, entryists, who are trying to turn it from a broad church to narrow faction. People who are at the heart of this government, who are probably not even members of the Conservative party, who care nothing about the future of the Conservative party, I intend to defend my party against them.”

The former foreign secretary and chancellor said it was his understanding that Cummings was “not and never has been” a party member. “I haven’t heard a denial from Downing Street, but perhaps we will hear one if that is not the case,” he added.

So who is Dominic Cummings?

Dominic Cummings, the son of an oil rig project manager and a special needs teacher, was born in Durham in 1971. He attended a state primary school followed by the fee-paying Durham school and, in 1994, Oxford University, where he studied ancient and modern history.

After three years living in Russia, where he attempted to set up an airline connecting Samara in the south with Vienna, the then 28-year-old became campaign director of Business for Sterling, which worked to prevent Britain from joining the euro.

Although he has never, as far as anyone knows, been a member of a political party, Cummings was headhunted to be director of strategy for the then Conservative leader, Iain Duncan Smith, in 2002.

While he was seen as a “young, thrusting moderniser”, Cummings quickly offended party traditionalists. He quit the job after only eight months, describing Duncan Smith as incompetent.

Following the 2010 general election, the then education secretary, Michael Gove, appointed Cummings as his chief of staff. Many in Whitehall found Cummings as difficult as he found them. In 2013, civil servants in the Department for Education complained to the Independent of an “us-and-them, aggressive, intimidating culture” created by Cummings and Gove.

He never hid his disdain for the workings of Whitehall and has derided Westminster figures in eye-catching media interviews and published rambling blogposts that are obsessed over by Westminster insiders. He described prime minister David Cameron as “a sphinx without a riddle”, and former Brexit minister David Davis as “thick as mince, lazy as a toad, and vain as Narcissus”.

In 2015, Cummings and the political strategist Matthew Elliott founded Vote Leave, which was designated by the Electoral Commission as the official EU referendum leave campaign in April of the following year.

Since the EU referendum, its tactics have been the subject of a series of high-profile scandals. Vote Leave’s use of data analytics has been scrutinised after the Observer reported that the data-mining company Cambridge Analytica had links to the Canadian digital firm AggregateIQ, on which Vote Leave spent 40 per cent of its campaign budget.

In July 2018, the Electoral Commission announced Vote Leave had been found guilty of breaking electoral law by overspending, following testimony from whistleblowers. The group was fined £61,000 and referred to the police.

Cummings has used his blog to furiously defend himself and the Vote Leave campaign. In March 2019, he was found in contempt of parliament for refusing to appear at a committee of MPs investigating fake news. – Guardian