Justin Trudeau ‘can’t recall’ how many times he wore blackface

Footage emerges of third instance of Canadian PM in blackface, one month before election 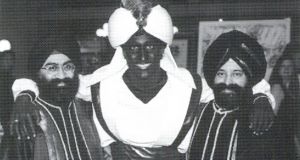 Justin Trudeau is scrambling to halt further damage to his re-election campaign after a string of racist images from his past put Canada’s image-conscious prime minister at the centre of yet another scandal.

Less than five weeks before the federal election on October 21st, the Liberal leader’s campaign was rocked when images emerged of Trudeau wearing blackface makeup.

On Thursday, new video emerged of a third instance of Mr Trudeau in blackface – just hours after he had apologised for wearing what he described as “racist” makeup to a costume party in 2001.

The latest images came in a short, undated video clip published by Global News in which, Mr Trudeau – his face, arms and legs painted black – waves at the camera and sticks his tongue out. The opposition Conservative party – currently neck-and-neck with Mr Trudeau’s Liberals – confirmed it had sent the video to Global News earlier in the week.

A spokesman for the prime minister said he had spent the morning calling Liberal candidates and community leaders to fully apologise for what he did “knowing how racist and hurtful this type of thing was”.

The scandal erupted late on Wednesday, when Time magazine published an image of Mr Trudeau dressed as Aladdin – complete with dark skin makeup and a turban – at a 2001 function at a private school where he was then working as a 29-year-old teacher.

Mr Trudeau immediately apologised, and acknowledged that he had previously blacked up at a high school talent show, when he had sung Day-O, the traditional Jamaican song.

“I apologise profoundly,” Mr Trudeau told reporters aboard his campaign plane. “I didn’t think it was racist at the time, but now I see, it was a racist thing to do.

“I’m pissed off at myself. I’m disappointed in myself,” he said.

“How do you look someone in the eye that has mocked the lived reality that I have lived – but, more importantly, what a lot of Canadians have lived,” said Jagmeet Singh, leader of the New Democratic party.

The Conservative leader, Andrew Scheer – Mr Trudeau’s main opponent – said he was “shocked and disappointed” and claimed the prime minister had “lied” in his apology to Canadians.

But Scheer has also faced calls in recent weeks to eject members from within his own party for racist or homophobic statements. He told reporters he would stand by candidates who showed genuine remorse for previous actions – a standard he appeared unprepared to offer to Mr Trudeau.

The Green party leader, Elizabeth May, said she was “deeply shocked by the racism shown in this photograph of Justin Trudeau”, saying the prime minister must commit to learning better social justice leadership at “all levels of government”.

A spokesman for Mr Trudeau said that the prime minister had spent Thursday morning calling community leaders and Liberal politicians.

Greg Fergus, a Liberal MP in Quebec and member of the federal Black Caucus, said he was “hopeful” the incident could help spur “nuanced” conversations about systemic racism in Canada.

“I think the real measure of the man, and I think the thing we need to be talking about, is all the amazing things we have done for diversity,” Fergus said.

“What Justin Trudeau did was wrong. He has apologised. I know it is not representative of the man he is,” Mitzie Hunter, a black member of Ontario’s Liberal party, tweeted. “This is a teachable moment for all of us. I accept his apology and I hope Canadians do too.”

Others, were less forgiving of the prime minister’s previous actions.

“The privilege continues. There is no excuse for this. Apology is a first step. You should be aware of the history of #blackface and racism in this country and others. Apparently #diversityisourstrength? Deeply disappointed,” tweeted former colleague Celina Caesar-Chavannes, who left the Liberal party in March 2019.

After his landslide electoral victory in 2015, Mr Trudeau was praised for his apparent commitment to diversity and inclusion, as well as polices which appeared to offer an explicit rebuke to those of Donald Trump: he quickly named a young and ethnically diverse cabinet and initially welcome large numbers of Syrian refugees.

But he is fighting for his second parliamentary majority against the backdrop of a protracted political scandal: earlier this year Canada’s ethics watchdog found that Trudeau broke the country’s conflict of interest law when he allegedly pressured his attorney general to halt the criminal prosecution of the Quebec-based engineering giant SNC Lavalin.

Mr Trudeau’s Liberal party is effectively locked in a dead heat with rival Conservatives in terms of the popular vote, but they hold an edge when it comes to winning seats in parliament.

It remains unclear how the images will affect the prime minister, whose political career has benefited as much from his carefully curated public persona as from his policies.

When asked by reporters if he would eject a member of his own party for a similar image, he said he wouldn’t entertain “hypotheticals” and that each incident would be viewed on a “case-by-case basis”.

Asked why he should stay on as leader, MrTrudeau responded: “I’m asking Canadians to forgive me for what I did.” – Guardian