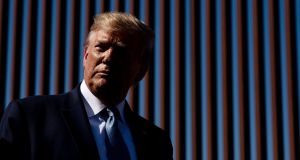 US president Donald Trump. A whistleblower alleges he made an unspecified commitment to a foreign leader. Photograph: Erin Schaff/The New York Times

A potentially explosive complaint by a whistleblower in the intelligence community said to involve President Donald Trump emerged Thursday.

The allegation involves at least one instance of Trump making an unspecified commitment to a foreign leader and includes other actions, according to interviews. At least part of the allegation deals with Ukraine, two people familiar with it said.

The complaint, submitted by a member of the intelligence community to its inspector general, renewed questions about how the president handles delicate information and comes amid a continuing oversight dispute between administration officials and House Democrats

Trump defended his actions, and allies described his style with foreign leaders as more freewheeling than typical high-level diplomacy. “I would only do what is right anyway, and only do good for the USA!” Trump wrote on Twitter.

Though it is not clear how Ukraine fits into the allegation, questions have already emerged about Trump’s dealings with its government. In late July, he told the new president that Ukraine could improve its reputation and its “interaction” with the United States by investigating corruption, according to a Ukrainian government summary of the call.

Some of Trump’s close allies were also urging the Ukrainian government to investigate matters that could hurt the president’s political rivals, including former vice president Joe Biden and his family.

The controversy first erupted a week ago, when Democratic Representative Adam Schiff of California, and the chairman of the House Intelligence Committee, revealed the existence of the complaint and disclosed the acting director of national intelligence, Joseph Maguire, had blocked the inspector general from sharing it with Congress, as generally required by law. The inspector general deemed the complaint legitimate and opened an inquiry.

Maguire’s intervention touched off the latest in a series of clashes between congressional Democrats seeking to conduct oversight and administration officials who they say are stonewalling their requests for information. Democrats accused Maguire of ignoring the law, possibly to protect Trump or another high-level official, though intelligence officials insisted that they blocked legislators’ access to the complaint in accordance with the law, not politics.

....Knowing all of this, is anybody dumb enough to believe that I would say something inappropriate with a foreign leader while on such a potentially “heavily populated” call. I would only do what is right anyway, and only do good for the USA!

Andrew Bakaj, a former CIA and Pentagon official whose legal practice specialises in whistleblower and security clearance issues, confirmed he was representing the official who filed the complaint. Bakaj declined to identify his client and said he would not disclose details of the complaint.

For nearly a week, the controversy remained opaque. Then on Wednesday evening, the Washington Post reported the whistleblower’s allegations centered on at least one conversation involving Trump, setting off another frenzy in Washington.

The inspector general, Michael Atkinson, appeared on Capitol Hill in a closed-door session Thursday but divulged no specifics beyond saying that the complaint involved multiple actions, according to two officials familiar with his briefing.

He would not say whether the complaint involved the president, according to committee members. But separately, a person familiar with the whistleblower’s complaint said it involved in part a commitment that Trump made in a communication with another world leader. No single communication was at the root of the complaint, another person familiar with it said.

The intelligence official filed the formal whistleblower complaint on August 12th. Such a complaint is lodged through a formal process intended to protect a whistleblower from retaliation.

Questions about Trump’s discussions with the Ukrainians involve his allies, including his personal lawyer Rudy Giuliani, who hoped to persuade Kiev to investigate matters that could help Trump politically.

According to government officials who handle foreign policy in the United States and Ukraine, Giuliani’s efforts created the impression that the Trump administration’s willingness to back Ukrainian president Vladimir Zelensky was linked to his government’s readiness to in turn pursue the investigations sought by Trump’s allies.

Giuliani said he did not know whether Trump discussed those matters with Zelensky, but argued it would not be inappropriate. The president has the right to tell another country’s leader to investigate corruption, particularly if it “bleeds over” into the United States, Giuliani said Thursday. “If I were president, I would say that,” he added.

Around the same time, a separate issue was brewing. Congressional aides and administration officials who work on Ukraine issues had become concerned that the White House was “slow-walking” a military assistance package for Kyiv, according to people involved in an effort to free up the assistance.

Last week, the two issues merged when Schiff and two other Democratic House committee chairmen requested the transcript of Trump’s call with Zelensky from the State Department and the White House as part of an investigation into whether Trump and Giuliani were misappropriating the American foreign policy apparatus for political gain.

The Democrats indicated they planned to examine whether the delay in the assistance “is part of President Trump’s effort to coerce the Ukrainian government into pursuing politically motivated investigations.”

The next day, Schiff wrote to Maguire seeking information about the whistleblower complaint. And the following day, the White House released the military assistance to Ukraine, with little explanation.

The unusual disagreement between Maguire and Atkinson centers on who is best suited to investigate the whistleblower’s accusations. In a letter to the leaders of the House Intelligence Committee, Atkinson wrote that the complaint falls within the jurisdiction of the director of national intelligence and “relates to one of the most significant and important of the DNI’s responsibilities to the American people”.

Maguire has not disputed the seriousness of the allegation but determined in consultation with the Justice Department that it was outside the scope of the law requiring whistleblower complaints be forwarded to Congress. Any accusation that triggers the requirement must involve the funding, administration or operations of an intelligence agency.

Administration officials have shared at least some details of the accusations with the White House, to allow officials to weigh whether to assert executive privilege, an official said. – New York Times