Signs that EU states are adjusting policies to appease China 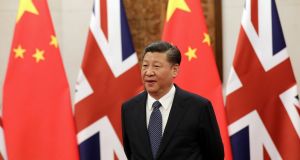 China is stepping up its efforts to systematically influence decision-making in the European Union in what amounts to an attack on liberal democracy, according to a report by two major Berlin-based think tanks.

European states are required to adjust their policies in fits of “pre-emptive obedience” to curry favour with China, and EU political elites have started to embrace Chinese rhetoric and interests, said the report, Authoritarian Advance, by the Global Public Policy Institute (GPPI) and Mercator Institute for China Studies (Merics).

“China’s increasing political influencing efforts certainly pose a challenge to liberal democracies, and as such to European values and interests as well,” Lucrezia Poggetti, a research associate in Merics’s European China policy unit and one of the authors of the report, told The Irish Times.

China is using its economic muscle in countries such as Greece, where it has made substantial investments, to push its agenda, and its authoritarian form of government chimes well with illiberal models of government in countries like Hungary.

“Countries like Ireland should be concerned too. Looking at political and economic elites, the Chinese government can leverage the promise for investment or threaten to retaliate in the economic realm to get what it wants,” said Ms Poggetti.

She cites an incident in 2016, when a government official threatened to stop the process of resuming Irish beef exports to China in response to Ireland voting in the UN Human Rights Council criticising China’s human rights record.

Since the 19th Communist Party congress in October significantly strengthened the president Xi Jinping’s power base, China has become increasingly confident about its political and economic model, and its exportability.

Combined with Washington’s retreat from global governance, and Europe’s own weaknesses, Ms Poggetti believes it is plausible to think such threats will become increasingly common.

The report contains a map of China’s authoritarian influence in Europe, which shows the main impact on Ireland is through civil society and academia, via 16 Chinese Students and Scholars Associations (CSSAs).

“These are funded by the national Chinese embassy, and can be mobilised on the occasion of events that are considered sensitive by the Chinese government to complain against universities and as such limit academic debates,” said Ms Poggetti.

In 2014, the Chinese embassy in Ireland reportedly contacted the CSSA at Trinity College to identify students involved in demonstrations in support of the Hong Kong protests in Dublin.

And in March 2015, then-ambassador Xu Jianguo warned Trinity College against inviting speakers hostile to China – in this case, the Tibetan political leader Lobsang Sangay – saying it could harm the university’s abilities to forge links with Chinese institutions.

Recently Beijing has been actively promoting a narrative of putting development ahead of civil and political rights.

Last year it held the South-South Human Rights Forum, which gathered representatives from more than 70 countries in Beijing, and in June a China-proposed resolution titled The Contribution of Development to the Enjoyment of All Human Rights was adopted by the UN Human Rights Council.

Efforts to boost Chinese influence have received far less scrutiny than Russia’s meddling in European politics, but in the medium- to long-term are likely to be far more consequential.

Australia is cited as an example of how Beijing has been trying to expand its influence. According to reports, 80 per cent of all foreign political donations to Australian political parties between 2000 and 2016 came from businesses with close links to China, while China controls large parts of the country’s power grid and has key interests in ports and the property market.

China has repeatedly rejected stories of infiltration, saying they are media fabrications.

The report said the appointment of former British prime minister David Cameron to head a large Chinese infrastructure fund showed how the UK would form an increasingly important bridgehead as Beijing took advantage of Britain’s need for a post-Brexit trade and finance strategy.

“If Europe intends to stop the momentum of Chinese influencing efforts, it needs to act swiftly and decisively. In responding to China’s advance, European governments need to make sure that the liberal DNA of their countries’ political and economic systems stay intact,” the report said.