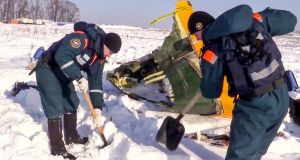 An emergency team works at the scene of a AN-148 plane crash in Stepanovskoye village, about 40km (25 miles) from the Domodedovo airport, Russia. Photograph: Russian Ministry for Emergency Situations photo via AP

The crash of a Russian passenger plane that killed all 71 people on board may have been caused by the pilots’ failure to activate heating for pressure measurement equipment, resulting in flawed speed data, investigators have said.

The flawed indication came because the pilots failed to turn on the heating unit for pressure measurement equipment before take-off.

The pilots put the An-148 on autopilot after taking off from Moscow’s Domodedovo Airport but took manual controls back when they saw clashing speed data.

The plane plummeted into a snowy field six minutes after take-off, killing all 65 passengers and six crew.

The pilots performed a series of manoeuvres and eventually took the plane into a dive at 30-35 degrees before the crash.

The committee said it is continuing to study the data, but noted that “erroneous data on the pilots’ speed indicators may have been a factor that triggered the special flight situation”.

It emphasised that the flawed speed data resulted from the “icing of pressure measurement instruments that had their heating systems turned off”.

Earlier reports indicated that the plane’s captain had chosen not to have the plane undergo a de-icing treatment before take-off.

The crew decides whether to have the plane sprayed by de-icing liquid, depending on weather conditions and the state of the plane.

The An-148 model has a patchy safety record, with one previous crash and a string of major incidents in which pilots struggled to land safely.

The carrier, Saratov Airlines, has grounded several other An-148s in its fleet pending the crash investigation.–PA