Time for Brexiteers to let us in on their sovereign vision 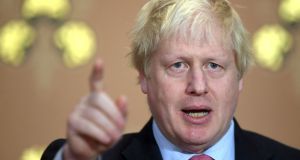 Britain’s foreign secretary Boris Johnson: he must spell out the uses to which Britain can put the freedom that comes with life outside the customs union. Photograph: Victoria Jones/PA Wire

If Brexit does its worst, and Britain sags in relevance, those who suspect George Soros of a plot to overturn the referendum will come to pine for the days when global tycoons thought this country worth subverting. An outsider’s thumb on the scales of our politics is easier to tolerate than a shrug of indifference.

In columns and speeches under his own name, Soros is candid about his political liberalism. As a “conspirator”, he puts you in the mind of a cartoon bank robber with a hooped top and a sack emblazoned with pound signs.

For truly suspect furtiveness, look instead to the hardest Leavers. The debate over exit increasingly centres on whether Britain should remain in the customs union or at least align its regulations with the EU. Some Leavers want no part of either. The right to sign bilateral trade deals and diverge from EU regulations are, they say, the very spoils of exit. Without them, Britain will be neither sovereign nor as prosperous as it might be. Theirs is the entirely reasonable free-market case for the hardest of departures.

Strangely, that is where the case stops. Once they insist on the right to diverge, Leavers become as reticent as any central banker on how they would use that right. Which regulations would go to make Britain hyper-competitive and offset the costs of exit? Which labour laws? Which technical standards? Which sectors and regions do they expect to benefit, and how?

Absolute precision is too much to ask, but some general sense is not. Voters are being urged to brave a hard exit that would tug at the seams of the kingdom, disrupt the economic life of the Republic of Ireland and risk some material cost to themselves. The least they should expect in return is an impressionistic picture of Britain’s post-EU economic model from the people who are keenest on the idea. Instead, they have to make do with generalities about sovereignty: the principle rather than the content of the freedom to diverge.

Leavers will say that policy specifics are out of bounds. They cannot tie the hands of future governments, or even this one. This reticence is hard to square with their own pressure on Theresa May, the prime minister, to rouse voters and investors with a detailed account of a sunny future. They have spent a year trying to remove Philip Hammond as chancellor of the exchequer precisely because he has left the economic opportunities of exit unsung.

What are these opportunities? If it is part of his job description to itemise them, it is incumbent on them, too, as people who fought the referendum, won it and now fight as hard again for the severest interpretation of the result.

Now is a good time to speak. In the coming weeks, May will give a speech that describes Britain’s preferred relationship with Europe. Other ministers are expected to join in with their own thoughts on security and trade after exit. It is meant to add up to what Penny Mordaunt, the international development secretary, calls a “vision”.

In the crossfire of speeches, hard Leavers would be derelict to keep silent. Government policy on a momentous question is highly pliable right now. To mould it in their favour, they should spell out the uses to which Britain can put the freedom that comes with life outside the customs union and regulatory alignment. So far, they have survived on prolific use of the word “buccaneering” and Elizabethan imagery of open seas, as though Britain were the only EU member with a coastline.

They should state their case because they have one. They always said that Britain could eventually make up any loss of European business with gains elsewhere, as long as the economy unyoked from the stifling rules of an insular, anti-entrepreneurial continent. This is not impossible in theory. But it implies some dramatic competitive reforms in an economy that already scores well in global rankings for ease of doing business – too well, for the tastes of many workers. To avoid any discussion of what those reforms might be starts to look less like respect for future governments, and more like fear of the popular reaction here and now.

Consistently good readers of public sentiment, the Leavers know that voters do not want a much less regulated, much more open economy. (Or if they do, they have cast some perverse votes in recent years.) But they also know that such liberalisation is the one thing that might make the hassle of hard exit worth the candle.

They find themselves in a strange middle, talking up the necessity of self-government but talking down the changes that might flow from it, alluding to a Singaporean future for the British economy but blanching at any mention of that S-word. – Copyright The Financial Times Limited 2018