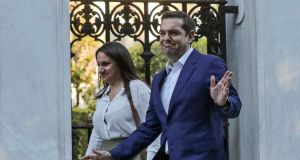 Greece is on track for a general election on July 7th, three months ahead of schedule, after the president accepted a request from prime minister Alexis Tsipras to dissolve parliament after a heavy defeat in European parliamentary elections.

During a brief meeting with president Prokopis Pavlopoulos, Mr Tsipras said he wanted the early election to avoid months of campaigning that might have endangered the bailed-out country’s economy.

That defeat came despite a raft of new welfare handouts Mr Tsipras had announced earlier that had alarmed bailout creditors who feared the spending would derail the country’s shaky finances.

Mr Tsipras told Mr Pavlopoulos that following the May 26th European elections “conditions were such that . . . there would have been an extended campaign period, and I estimated that this might engender dangers for the smooth course of the economy.”

“This would have endangered the efforts and sacrifices of the Greek people,” he added.

Mr Tsipras has said he will stay in office until the elections, and is expected to appoint caretaker ministers to a handful of key cabinet posts.

Markets welcomed the prospect of the vote. On Monday, Greek stocks surged 3.3 per cent to a 13-month high.

Mr Tsipras first swept to power in January 2015 on a populist platform that resonated with austerity-weary Greeks, who rejected establishment politicians to pin their hopes on Syriza, then a small party with no previous experience in government.

He pledged to scrap all the painful spending cuts, tax hikes and income reductions demanded over the previous five years by the country’s European partners and the International Monetary Fund in return for the rescue loans that protected Greece from bankruptcy.

But a tumultuous few months of negotiations with creditors led to limits on the amount Greeks could withdraw from banks and near-bankruptcy for the country.

Mr Tsipras was finally obliged — against the wishes of the people as expressed in a referendum he had called days earlier — to sign a new multibillion-euro bailout, conditional on further tax hikes and pension cuts.

Nevertheless, Syriza was re-elected in September 2015 but soon dropped behind New Democracy in the polls.

Mr Tsipras’s ratings were badly hit by an unpopular deal to normalise relations with neighbouring Macedonia, dissatisfaction among the austerity-clobbered middle classes, the botched response to a wildfire that killed 101 people last summer, claims of government interference with the judiciary and a nepotism scandal.– AP