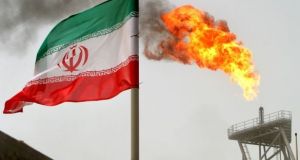 An oil production platform in the Soroush oil fields alongside an Iranian flag in the Persian Gulf. Photograph: Raheb Homavandi/File Photo/Reuters

The United States sanctioned Iran’s largest petrochemical holding group on Friday for indirectly supporting the Islamic Revolutionary Guard Corps (IRGC), a step it said aimed to dry up revenues to the Iranian military unit but that analysts called largely symbolic.

Friday’s sanctions targeted the Persian Gulf Petrochemical Industries Company (PGPIC) for providing financial support to the economic arm of the IRGC, a military organisation in charge of Iran’s ballistic missile and nuclear programmes.

The new sanctions come as the Trump administration seeks to increase economic and military pressure on Iran both because of its nuclear and missile programmes as well as its support for proxy groups in Syria, Iraq, Lebanon and Yemen.

US president Donald Trump antagonised Iran, and dismayed key US allies, when he last year pulled out of a 2015 agreement between Iran and world powers under which Tehran curbed its nuclear program in return for easing some sanctions.

US-Iranian tensions have heightened further since April because of Washington’s moves to cut off Iran’s oil exports, its deployment of an aircraft carrier strike group to deter any Iranian attacks on US interests, and recent attacks on Saudi, Norwegian and Emirati tankers that Washington blamed on Tehran.

Iran has denied responsibility for the May 12th attacks on four tankers off the United Arab Emirates coast.

“This action is a warning that we will continue to target holding groups and companies in the petrochemical sector and elsewhere that provide financial lifelines to the IRGC,” US treasury secretary Steven Mnuchin said in a statement.

Senior Trump administration officials, speaking on condition of anonymity, described the sanctions as the latest examples of a broad economic clampdown on Iran’s economy that would help dry up funds for the IRGC, a key part of its military.

“This would continue to have a very chilling effect on the prospects for any future recovery for the Iranian economy,” one official told Reuters, saying the petroleum and petrochemical industries “have been serving for the last 40 years as a kind of institutionalised slush fund for the IRGC.”

US persons are already barred from nearly all dealings with the Iranian economy, so the latest sanctions largely apply only to non-US companies and individuals.

Three analysts and a former treasury official said the latest sanctions will likely have only a modest effect because non-US companies already shy away from doing business with Iran’s petrochemicals sector because of existing sanctions.

Under sanctions reimposed on November 5th after Trump left the Iran nuclear deal, anyone carrying out a significant transaction in Iranian petrochemical products could already be hit by a menu of sanctions, including being barred from the United States.

Suzanne Maloney of the Brookings Institution think tank described the latest US sanctions as “a natural next step in what I think is a deliberately redundant array of restrictions.”

“The administration is banking on the overlapping authorities and obstacles to compound the pressure on the Iranians and create a sense that the entire economy is off limits,” she said.

The former treasury official, who asked not to be named, said the new sanctions would have little effect because most multinationals had already ceased dealing with Iran, and described them as “a public relations” move.

“It’s a good way of keeping the political pressure on the front page,” the former official said.–Reuters