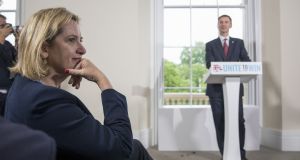 Speaking at the launch of his campaign for the Conservative leadership, he said German chancellor Angela Merkel and French president Emmanuel Macron indicated to him last week that they were open to renegotiating the Brexit deal.

But Mr Hunt warned that leaving the EU without a deal on October 31st, as fellow leadership candidates Boris Johnson and Dominic Raab have proposed, could lead to the Conservatives being “annihilated” at a general election. He said that parliament had made clear its intentions to take a no-deal Brexit off the table no matter what the new prime minister says or does.

“Squeezed by the Brexit Party on the right and the Lib Dems on the left, we simply allow Labour through the middle. And if that happened nationally it would be the end of Brexit. Because whatever else a Labour government did – and I worry about all of it – it would never deliver Brexit,” he said.

The backstop is a provision in the existing EU-UK withdrawal agreement to avoid a hard Border in Ireland after Brexit. It has emerged as a key sticking point to the agreement being passed by the House of Commons.

Environment secretary and Conservative leadership candidate Michael Gove promised to negotiate “a full stop to the backstop”, but added that he took seriously concerns expressed about the situation on the island of Ireland. He said the suspension of the Stormont institutions and Sinn Féin’s abstentionist policy at Westminster meant there was no Irish nationalist representation anywhere in the UK.

“You need to get them back into government to ensure that the rights and concerns of Northern Ireland’s nationalists are protected. That’s number one and I will personally lead those talks,” he said.

He said this could be achieved through “alternative arrangements” which could obviate the need to go into the backstop or ensure it would only last a short time.

Launching his campaign, Mr Raab said he would take the UK out of the EU on October 31st with or without a deal and would insist that all his ministers were signed up to a no-deal Brexit. He said he would make the EU a final offer to replace the backstop with a free trade agreement and technological and administrative measures to keep the Border open.

Health secretary Matt Hancock, who is pitching himself as the candidate of the next generation, said Mr Raab’s threat to prorogue parliament would betray the sacrifice of the men who died on D-Day.

“There’s this idea from some people that to deliver Brexit we should suspend our parliamentary democracy – that we should prorogue parliament. But that goes against everything that those men who waded onto those beaches fought and died for, and I will not have it,” he said.