Joe Biden running out of time in New Hampshire primary 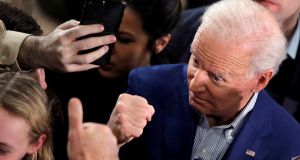 Joe Biden, the former US vice-president who is struggling out of the blocks in the Democratic presidential race, had just taken some friendly questions at a town hall in Hampton when a young woman warned she would be “a bit mean”.

“How do you explain the performance in Iowa and why should voters believe that you can win the national election?” she asked.

Biden (77) responded that it was a “good question”. He finished in fourth place in last week’s Iowa caucuses, and polls suggest he might do even worse in Tuesday’s New Hampshire primary – a result that would undermine his argument that he would be able to beat Donald Trump “like a drum” in November’s presidential election.

After congratulating Pete Buttigieg and Bernie Sanders for leading the field in Iowa, Biden asked his audience to reserve judgment about his prospects until the race moves to the more ethnically diverse states of Nevada and South Carolina.

“You have to take the first four as one,” he said. “You’ve got two primaries and two caucuses back to back.”

Biden’s plea for patience is based on polls showing him to be the preferred candidate of African-American voters, who will be crucial in South Carolina. However, a Quinnipiac poll released on Monday suggested that his African-American firewall may be crumbling.

The poll showed Biden’s support nationally among black Americans has fallen from 49 per cent before Iowa to 27 per cent, while Michael Bloomberg, the former New York mayor, had become the second most popular candidate among African-American Democrats – backed by 22 per cent, up from 7 per cent last month.

There have not been many polls in South Carolina, but Biden leads with 31 per cent, while former hedge fund manager Tom Steyer in second at 18.5 per cent, according to an average compiled by RealClearPolitics.

Charlie Cook, a veteran political analyst, said history showed that Biden – seen as the frontrunner in the Democratic primary contest only weeks ago – may be running out of time. Candidates who fail to make the top three in Iowa and top two in New Hampshire have no path to the presidency, he said.

“It’s pretty safe to assume that Biden’s numbers in Nevada and South Carolina would not hold up with poor showings in both Iowa and New Hampshire. Biden needs a miracle in New Hampshire, not later,” Cook said.

As recently as October, Biden told Iowa’s KGAN television that the Midwestern state and New Hampshire were critical: “I’ve got to win them both.” Speaking at the Rex, a theatre in Manchester that once featured adult movies, Biden made it clear he was pinning his hopes on African-American voters in other states.

“The only Democrats to win the presidency is where we had overwhelming support from the African-American community,” he said. “That was true for Jimmy Carter, Bill Clinton and Barack Obama. ”

At rallies across Iowa and New Hampshire, Biden fans said he was the most qualified to be president. “He has much more experience than the other candidates. He is also a people person. I can really feel the vibe when he relates to people,” said Gloria Todaro (67), a black woman at the Hampton event.

But while Biden impresses some older voters with tales about meeting world leaders during his five decades in politics, he appears to be struggling to win over younger Americans.

Speaking at The Rex, John Lynch, the former Democratic governor of New Hampshire, said that he had met many young Biden supporters. But when asked why so few attended Biden events, he said: “I don’t know why they’re here, or not here. I don’t know.”

In Hampton, Natalija Pasalic (22), a student, said Biden did not appeal to her generation. “He talks a lot about our parents and our future, but not from our standpoint. He just talks about his experience, which is great and dandy, but his experience 20 years ago isn’t what’s happening today,” she said.

While younger voters are flocking to Sanders, the 78-year-old self-declared socialist, Biden has another problem – some older voters feel he is too old and are embracing younger alternatives to Sanders.

Barbara Wilson, a 68-year-old originally from Germany, said her ideal ticket would be Amy Klobuchar, the US senator from Minnesota, and Buttigieg because she wants to see a moderate president. “Buttigieg is a bit young really, but I think it’s more dangerous to have Biden who sometimes stumbles and misspeaks.”

Speaking at a Buttigieg event in Lebanon, Mike Caldwell, a 49-year-old whose son Christopher was wearing a “Pete 2020” shirt, said he had been leaning toward Biden but was reassessing his position after feeling the energy at the packed rally.

“Obviously events like this kind of sway you a little bit. I do like that Pete’s young and his ‘turn the page’ theme resonates with me,” he said.

His 77-year old mother-in-law, Linda Morgan, a life-long Biden fan from Pennsylvania, said she was also thinking again after the Buttigieg town hall: “He reminded me of Obama. He is calm and he is young.” – Copyright The Financial Times Limited 2020