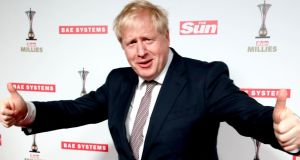 British government ministers are actively looking into Boris Johnson’s idea of a road bridge linking Scotland and Northern Ireland, Downing Street has said, rejecting scepticism on the issue from engineers and criticism of the prime minister’s own somewhat mixed record on delivering bridges.

“Government officials are carrying out work in relation to the idea of a bridge linking the GB mainland to Northern Ireland,” Mr Johnson’s spokesman said, saying this was being done by “a range” of officials reporting into Number 10.

“There is a proper piece of work being carried out into the idea,” the spokesman said. “It is reporting into Number 10, but obviously we will take advice from wherever it is needed.” He gave no details on when the work would be completed.

Mr Johnson, who as London mayor spearheaded the doomed garden bridge project which cost more than £50 million (about €60 million) without work even beginning, first raised the idea of the 32km-plus bridge to Larne in Northern Ireland in 2018.

He called again for the link during the Conservative leadership campaign, despite engineers expressing scepticism at the idea of building such a link over waters more than 300m deep in places, parts of which were used by the British ministry of defence to dump more than 1 million tonnes of obsolete munitions.

The plan has been seen as a concession to Northern Irish unionists, especially given their concern at new customs checks between Northern Ireland and the rest of the UK under Mr Johnson’s Brexit plan.

Asked about the bridge by the DUP MP Ian Paisley in the House of Commons in December, Mr Johnson called it “a very interesting idea”, adding: “I advise him to watch this space and, indeed, to watch the space between the islands, because what he has said has not fallen on deaf ears.”

Mr Johnson has long been an enthusiast for major infrastructure projects, but his visions only sometimes become reality, and those which do have had a tendency to not fully deliver on his promises.

As London mayor, Mr Johnson pushed repeatedly for the garden bridge across the Thames, despite repeated warnings about its economic unfeasibility and the complication of securing planning consents, wasting £53.5 million of funds, £43 million of it taxpayers’ money.

An even more ambitious idea for a new London airport in the Thames estuary came to nothing. As mayor, Mr Johnson did deliver a £60 million cable car across the Thames in east London, but a supposed key transport link later turned out to have just four regular users.

More expensive still was Mr Johnson’s plan for a “new Routemaster” bus for the city, allowing passengers to hop on and off open platforms.

Transport for London paid more than £280 million for a fleet of the buses which turned out to be baking hot in the summer, with the doors kept closed for safety reasons, and were unable to be sold to any other cities. Last month it was announced that the buses’ rear doors would be kept closed due to rampant fare evasion.

Mr Johnson’s spokesman rejected criticism of this record: “The prime minister is ambitious in terms of infrastructure projects. He’s looking at a wide range of schemes across the UK which could boost connectivity.” – Guardian