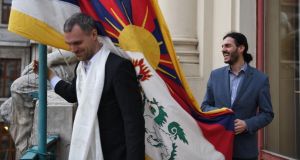 Prague mayor Zdenek Hrib (left) hanging the Tibetan flag on city hall in March 2019. Beijing has cancelled tours by Prague orchestras and scrapped a co-operation deal with Prague due to Hrib’s support for Tibet and Taiwan. Photograph courtesy of Prague city hall

The mayor of Prague plans to rename the square outside its Russian embassy in honour of murdered Kremlin critic Boris Nemtsov, in a move that may irk Moscow as much as his support for Tibet and Taiwan has angered China.

Zdenek Hrib, a member of the Czech Republic’s liberal Pirate Party, said a majority of Prague councillors were ready to back the proposal this month. They could also name a promenade in a nearby park after Anna Politkovskaya, a Russian investigative journalist who was shot dead in Moscow in 2006, he added.

“Boris Nemtsov was a Russian mathematician, physicist, liberal politician and critic of the Putin regime,” Mr Hrib wrote on Twitter.

“On 27th February 2015 he was shot in the centre of Moscow. On the occasion of this year’s commemoration of his death, we would like to rename the . . . square in front of the Russian embassy as ‘Boris Nemtsov Square’,” he added.

“Our decision is certainly not some random whim. We proceed from the long-term initiatives of our citizens, and also of course from the Czech human rights tradition, which should not be forgotten.”

A Czech petition calling for such a move has garnered thousands of signatures. Washington, Kiev and Vilnius have also renamed squares near their Russian embassies after Mr Nemtsov, who exposed high-level corruption in Russia in the years before his murder close to the Kremlin.

Separate groups of Chechens were convicted of gunning down Mr Nemtsov and Ms Politkovskaya, but their trials left many questions unanswered and failed to identify whoever ordered the murders.

He also praised the “wisdom” of Czech president Milos Zeman, who has described Mr Hrib as a “minor inconvenience” in his bid to improve relations with Russia and China, despite security warnings from his country’s intelligence services.

When a Prague district mayor announced plans last September to move a monument to a Soviet general, Russian politicians threatened to impose sanctions and compared him to a Nazi official.

Shanghai cut official ties with Prague last month after Mr Hrib signed a “sister city” deal with Taipei, the capital of Taiwan, which China claims as its own.

Last year, Beijing scrapped a partnership agreement with Prague after Mr Hrib refused to eject Taiwan’s envoy from a diplomatic event and flew Tibet’s flag from city hall on the 60th anniversary of its uprising against Chinese rule.