Belarus's main opposition leader Svetlana Tikhanovskaya says she fled to Lithuania for the sake of her children, after two nights of violent protests following the contested re-election of Alexander Lukashenko. Video: Reuters 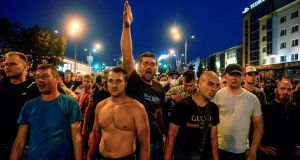 Protesters are pictured in Minsk, Belarus after long-time president of Belarus Alexander Lukashenko won the elections by a landslide with 80 per cent of the votes. The opposition does not recognize the results and has questioned the transparency of the counting process. Photograph: Yauhen Yerchak/EPA. 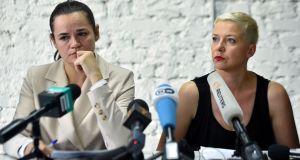 Belarusian pro-democracy activists have pledged to continue their push for regime change despite increasingly violent clashes between police and protesters and the decision of opposition leader Svetlana Tikhanovskaya to flee the country.

More than 5,000 people have been detained, one person killed and more than 200 injured during demonstrations since Sunday’s presidential election, which many Belarusians denounced as a sham after official results gave 80 per cent of votes to Alexander Lukashenko, the country’s autocratic ruler of 26 years.

Protesters started to gather again on Tuesday evening, and used social media to share photos and videos of riot police and soldiers on the streets of several cities and towns around the country, despite major state efforts to block internet access.

Ms Tikhanovskaya, a political novice who became Mr Lukashenko’s main challenger, left Belarus for neighbouring Lithuania in the early hours of Tuesday, in what her allies called a response to threats from his regime.

“I thought this whole campaign had made me really tough and given me enough strength to get through anything, but it seems I’m still the same weak woman that I was at the start,” she said in a video posted online.

“I know many people will understand me, many will condemn me and many will even hate me. But God forbid anyone face the same choice that I faced. So take care, please: not one life is worth what is happening now. Children are the most important thing in our lives.”

Ms Tikhanovskaya (37) sent her children to Lithuania for their own safety after reluctantly entering politics when her husband, a popular opposition blogger, was imprisoned in May.

In recent days the former English teacher – who spent several childhood summers in Roscrea, Co Tipperary, with other people affected by the 1986 Chernobyl nuclear disaster – appeared to be struggling to cope with the stress of the escalating tension and police violence in Belarus.

Her campaign rallies drew tens of thousands of people frustrated by political and economic stagnation in Belarus and angry at Mr Lukashenko’s handling of the coronavirus pandemic.

In a second video that appeared online, an apparently nervous and dejected Ms Tikhanovskaya seemed to read from a script as she urged her compatriots to “show common sense and respect for the law”.

“The people of Belarus have made their choice,” she said with eyes lowered. “I’m asking you not to confront the police and not take to streets, so as not to put your lives at risk.”

Her allies said the second video had been recorded when she was detained for several hours on Monday inside the central election commission in Minsk, as she lodged a formal complaint over the conduct of the election.

“Svetlana had no choice. The main thing is that she is free and alive ... but part of Svetlana’s team is still being held hostage,” said close aide Olga Kovalkova.

“We support all those who protest ... and peacefully fight for their rights,” Ms Tikhanovskaya’s team said in a statement. “We propose the start of dialogue on the peaceful handover of power to the people.”

Activists said workers at some factories started strike action on Tuesday in support of the protests, but Mr Lukashenko has vowed not to bow to rallies that he claims are orchestrated from abroad, to oust him and destabilise Belarus.

The European Union said it would review relations with Belarus in light of elections that were “neither free nor fair” and the “disproportionate and unacceptable violence” used by the authorities.

“We call on Belarusian political leadership to initiate a genuine and inclusive dialogue with broader society to avoid further violence,” it said. “The EU will continue to support a democratic, independent, sovereign, prosperous and stable Belarus.”