French and Dutch on alert over rise in coronavirus cases

New infections at nearly half of Dutch peak, as France sees ‘worrying increase’ 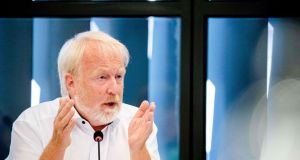 New daily coronavirus infections in the Netherlands are back to roughly half their level at the peak of the pandemic, while France’s prime minister has said it is crucial for his country to avoid a new lockdown amid a “worrying increase” in cases.

Jaap van Dissel, the Netherlands’ chief epidemiologist, told the Dutch parliament on Tuesday that 4,036 new Covid-19 cases had been reported in the past week, an increase of 55 per cent on the previous seven days. The figure translated to a daily average of more than 500, compared with nearly 1,200 at the peak of the pandemic.

The Dutch public health institute, RIVM, said the proportion of positive tests had risen from 2.3 per cent to 3.63 per cent over the same period, but added that the number of hospitalisations had fallen slightly – possibly because young people, who generally have milder symptoms, accounted for most of the new cases.

The Netherlands has recorded a total of nearly 60,000 cases and just over 6,000 deaths, with the number of fatalities falling to about one every seven days in recent weeks, compared with more than 150 in early April.

In France, which has reported an average of about 1,600 new infections a day for the past seven days, compared with roughly 4,300 in April, President Emmanuel Macron held a virtual cabinet meeting to discuss a rapid rise in case numbers.

Prime minister Jean Castex said the government would consult with local elected officials with the aim of expanding the number of areas across the country – currently 330 – where wearing a mask is now compulsory in the open air.

Mr Castex also said a ban on gatherings of more than 5,000 people would be extended until October 1st. “For the past fortnight, the epidemiological situation has been deteriorating,” he said. “The number of hospitalisations and ICU admissions has been increasing. Twenty-five new clusters are being identified every day. It’s worrying.”

The prime minister said it was “indispensable, and within our grasp” to avoid a crippling new lockdown. “We must be lucid, and get a grip on ourselves once again,” he said during a visit to a hospital in Montpellier.

Mr Macron tweeted that existing measures must be observed. The virus was “not taking a holiday”, he said, adding that “vigilance and respect of hygiene and distancing measures remain indispensable. Stay prudent.” France has so far recorded just over 200,000 Covid-19 cases and 30,000 deaths.

Cases in Belgium, however, are now rising at a slower rate than last month, with the week-on-week increase in case numbers slowing to 11 per cent compared with 58 per cent in July and an average of 588 new cases a day in the week to August 7th.

Cases have begun to decline in Antwerp, a recent virus hot spot, but continue to rise in Brussels. But a leading virologist, Marc Van Ranst, told De Morgen the country was in a crucial week.

“If the current stricter rules do not work, we will move towards lockdown again,” he said. “We know that that worked, even though it hurt us.” – Guardian