More than 100,000 Scottish exam grades to be reinstated after row

Results to be restored to those recommended by teachers, education secretary announces 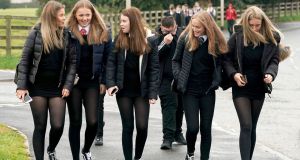 More than 100,000 Scottish exam grades that were marked down last week will be reinstated, by restoring results to those recommended by teachers, Scotland’s education secretary, John Swinney, has said.

Mr Swinney made an emergency statement to Scotland’s parliament on Tuesday afternoon after a furious row erupted last week when the Scottish Qualifications Authority announced it had downgraded 124,000 exam results, moderating the recommendations of school teachers in nearly a quarter of all awards.

Mr Swinney said he was directing the authority to reinstate all the downgraded results, which affected 76,000 pupils, to the results recommended by their teachers, and apologised to all those affected.

He told members of Scottish Parliament he had ordered an independent review into the handling of this year’s awards and paid tribute to the pupils who had protested last weekend and those who had written to him to complain. The review will be overseen by Prof Mark Priestly of Stirling University.

“It’s deeply regrettable we got this wrong, and I’m sorry about that,” he said.

Mr Swinney said the Scottish government and qualifications authority wanted to protect the integrity of the exam systems to ensure people had confidence this year’s awards were fair and comparable to previous years.

The recommended grades put forward by teachers would have meant significant inflation in grades this year, he said.

“In light of events, and listening to young people, we now accept that that concern, which isn’t without foundation, is outweighed by concern that young people, particularly from deprived backgrounds, will lose faith in the system and [feel that] ‘no matter how hard we work, the system is against us’,” he said.

He said the government’s stance on defending the integrity of the exam system had failed to take account of the trauma and stress experienced by many families during the coronavirus lockdown, including losses of close family to Covid-19.

The qualifications authority would advise schools of all the revised awards by August 21st, and issue fresh award certificates afterwards, and provide the new grades to the university and college clearing body, Ucas, to ensure applicants could get the places offered.

The Scottish Labour Party and Scottish Tories called on Mr Swinney to resign, accusing him of ignoring repeated cross-party warnings over the summer and of dithering for a week before admitting the system had failed.

Iain Gray, Labour’s education spokesman, said reinstating downgraded results was “a victory for fairness and common sense and above all, a victory for those pupils who refused to take this injustice lying down, [but] how on earth did it come to this?”

Addressing Mr Swinney, Mr Gray added: “Why did he leave those young people twisting in the wind for a week, their hopes and ambitions in shreds?”

The Scottish Greens applauded Mr Swinney for accepting all four of its recommendations on reversing the qualification authority’s decisions, and dropped its threat to back a Labour no-confidence motion. The minority Scottish National Party government needed the Scottish Greens’ six votes to ensure Mr Swinney survived the vote.

First minister Nicola Sturgeon said on Monday her government accepted it had made a serious error.

“Despite our best intentions, I do acknowledge that we did not get this right,” she said. “I’m not prepared to have this year’s cohort of pupils, particularly from deprived communities, thinking that their hard work at school doesn’t count or the system is determined to be against them.” – Guardian