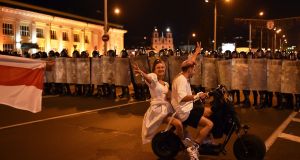 A couple ride a scooter in front of riot police during a protest in Minsk on Sunday night. Photograph: Sergei Gapon/AFP via Getty Images

Police in Belarus fired stun grenades and began detentions in a crackdown on protests that erupted as President Alexander Lukashenko was set to claim another election win on Sunday in the face of the biggest challenge in years to his grip on power.

Thousands of people took to the streets of Minsk while protesters clapped, shouted “victory” and honked their car horns in solidarity with the opposition.

Police blocked off streets and at least 10 people were detained in one spot in Minsk, a Reuters witness said, while local media reported detentions and clashes between police and protesters in the capital and other cities.

Military trucks and police vehicles including water cannon were seen entering Minsk as Belarusians voted on Sunday, after an increasingly tense campaign that saw tens of thousands of people join rallies for novice opposition candidate Svetlana Tikhanovskaya and demand an end to Mr Lukashenko’s 26-year rule.

Several members of her team were detained by Belarusian police in recent days along with activists and journalists, and access to social media platforms and the websites of independent election monitoring groups was reportedly disrupted on Sunday.

The official exit poll gave Mr Lukashenko 79.7 per cent of votes, with Ms Tikhanovskaya on just 6.8 per cent.

Critics of Mr Lukashenko said the election results would inevitably be falsified in his favour, as with previous ballots, and noted that official claims that 42 per cent of people had voted early, before Sunday, set the stage for mass fraud.

Widespread frustration over the country’s political and economic stagnation, and anger at Mr Lukashenko’s handling of the coronavirus pandemic, could fuel post-election protests despite his warnings that they will not be tolerated.

“Stick to the law, observe the law and all talk of repressions or something will disappear. The law and only the law. Break it and we will respond,” Mr Lukashenko warned on Sunday.

“The situation won’t get out of control, no one will let anything get past them, I guarantee you that,” said Mr Lukashenko (65), whose security forces have detained well over 1,000 protesters at recent opposition demonstrations.

“We are analysing all options, but there’s absolutely no basis to say that from tomorrow the country will be thrown into chaos or some kind of confrontation or civil war. I can sincerely tell you and guarantee you that.”

The former Soviet state farm boss claims foreign powers want to destabilise Belarus, and traditionally warm relations with Moscow have been strained by the arrest last week of 33 Russian mercenaries outside Minsk.

Ms Tikhanovskaya decided to run for president when her husband, a popular opposition blogger, was jailed earlier this year. She joined forces with two other women – the wife of another barred presidential candidate and the campaign chief of a second jailed opposition figure – to lead a pro-democracy movement that represents the biggest challenge in many years to Mr Lukashenko’s rule.

The former teacher, who sent her two children abroad during the campaign for their own safety, says she has no long-term political ambitions, but wants all political prisoners to be released in Belarus and for free and fair elections to be held.

“I really want honest elections, because if the authorities have nothing to fear, if all the people are really in favour of Alexander Grigoryevich [Lukashenko], then we would agree with that, if elections were honest,” said Ms Tikhanovskaya, who spent several childhood summers in Roscrea, Co Tipperary, with other people affected by the 1986 Chernobyl nuclear disaster. – Additional reporting Reuters