Janan Ganesh: Left turn could be a dead end for the Democrats 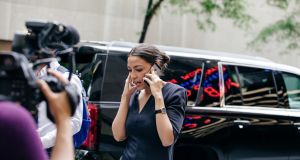 Donald Trump’s unwitting service to his country has been the transformation of the US left. Enemies of the “Washington consensus” now speak up for trade. Old relativists cherish facts. American leadership is recognised, however tardily, as indispensable to the world. It will not console his vanquished rival of 2016, but the first wave of counter-Trumpism has been decidedly Clintonian: a defence of the liberal centre, not a move to the orthodox left.

The second wave promises to be different. As it dawns on Democrats that this government will not crumble on its own, at least not imminently, their patience is flagging with the wait-him-out gambit of lore. Activists demand bold policies such as Medicare for all and the federal guarantee of a job. As expiation for recent brutalities at the border, lawmakers propose the end of Immigration and Customs Enforcement. At the age of 28, Alexandria Ocasio-Cortez, an avowed “democratic socialist”, has knocked off an incumbent to become the party’s Congressional candidate in New York’s 14th district.

This does not add up to leftist capture of the Democrats, yet. Middle-of-the-road candidates have prospered in other primaries and, for every enemy of ICE, the immigration and customs agency, there is a party elder to shout them down. But look at the trend. Fringe ideas are no longer fringe.

Such an outlaw candidate in 2016, Bernie Sanders can seem pale in his politics next to the so-called Resistance to Trump, and this is before confirmation hearings for supreme court nominee Brett Kavanaugh give focus to the movement. For the first time since the 1980s – before the New Democrats, before their hardening of the heart on crime and welfare – the left is a force.

The mystery is why anyone expects a better result this time. It is easy to fall for a political version of Newton’s third law: that someone as extreme as Trump must create an equal and opposite reaction – that victory for the populist right implies latent electoral demand for the populist left. Even if this were true, it is unclear how a liberal line on immigration meets any standard of populism.

But it is not true, or at least it over-intellectualises what happened in 2016, which had as much to do with Trump’s elemental charisma as the substance of his offering. (Imagine Mike Pence, the leaden vice-president, fronting the same campaign.) As time passes, the human factor in that election is being forgotten in favour of rather grand talk about the thesis of globalisation meeting the antithesis of white dispossession.

Democrats who scan the world know, and want to avoid, the ordeal of the European centre-left, squeezed as it is between true socialists and the jingoist right. But the US is not Europe. It does not have Italian levels of unemployment. It does not have Britain’s recent experience of fiscal cuts. It does not have the Marxist pedigree of France. Unlike Germany, its voters cannot count on the right to guard the welfare state as part of an immemorial consensus. These local particulars have worked against social democrats in these countries, who are either never left enough or too easy to take for granted.

Nor do these fluid electoral models – which allow, for example, the French Socialists to all but vanish – compare to the rigidities of the US. The two-party system amounts to a species-protection programme for the Democrats and the Republicans, even as Americans blanch at the sight of the both of them.

Next week, Jon Favreau, President Barack Obama’s former speech writer, launches a 15-episode podcast epic on the Democrats’ electoral predicament. Informed by testimonies from across this shaken party, The Wilderness should be the most substantial account of the American left since 2016. But the title might overstate the problem.

Across the rich world, there are centre-left parties that must rewrite their manifestos to survive. The Democrats are not among them. Since the end of the cold war, their presidential candidate has lost the popular vote exactly once, in 2004. It is because power is so natural to Democrats that 2016 struck them as a Year Zero, a cue for change, rather than as a technical failure of campaign and candidate.

The question is not whether the US could do with a proper party of the left. Given its inequalities, perhaps it could. The question is whether it wants one. You have to be looking very hard to see evidence that it does. It is craven to urge moderation on the president’s opponents while he stretches basic norms until they twang. Immoderation, however, could gift him a second term. – Copyright The Financial Times Limited 2018