Pulse of America: Supporters on Route 66 happy to follow Trump down the road

Republicans in Kingman believe president will win again in 2020 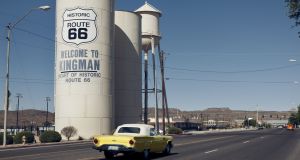 Kingman, Arizona, has long been one of the main staging posts on America’s most famous road. Photograph: Getty Images

Approaching the town of Kingman, three hours north of Phoenix, an array of signs direct tourists to the downtown area.

“Welcome to Kingman, heart of historic Route 66” proclaims the giant water tower that looms over the town’s dusty railtracks.

Kingman has long been one of the main staging posts on America’s most famous road. Route 66 was built in the 1920s, part of a rapidly expanding network of highways that sprung up across the US as car travel increased and the country’s economy boomed.

Linking Chicago to Los Angeles, the 4,000km road soon became one of the most travelled in the US, a symbol of hope and adventure for a country increasingly on the move.

With the advent of the interstate highway system, traffic on the road plummeted. In 1985, it was decommissioned, its historic shields taken down, and a piece of America looked set to disappear. But a campaign to preserve Route 66 soon emerged, leading to the enactment of several laws to preserve the cultural history of the road and support its particular place in the American collective consciousness.

Today, Kingman continues to wear its Route 66 badge with pride.

Though the town has seen better days, glimpses of old America are everywhere. Small antique and gift shops line the main street, a local eatery called “Yesterday’s Restaurant” advertises karaoke, while at intervals the unmistakable sound of the local train whizzing by fills the air.

Kingman is also strong Trump country. In the 2016 election Mohave County, where the town is located, saw the highest percentage of support for Donald Trump in the state of Arizona – 74 per cent of the population voted for the Republican nominee. Turnout was high, with 70.3 per cent of registered voters casting their vote, up from 61.6 per cent in 2012 and 65.5 per cent in 2008.

Local physician Laurence Schiff chairs the Mohave County Republican Party. Over iced coffee in Beale Street Blues on Kingman’s main drag, Beale Street, we talk Trump and why he believes the president will win again in 2020.

Originally from New York, Schiff moved west in part because he felt his conservative values were not reflected on the east coast – he believes he was passed over for jobs in the medical profession partly because of his politics.

Schiff, who had been active in the Republican Party for years, identified early that Trump would be the candidate to emerge from the Republican primaries. “Look, I was a big fan of Ted Cruz, but I realised that it didn’t matter, if he could not win. Basically, I made a calculation that Donald Trump could win the election. I have seen a lot of politicians in my time. Having lived in places like New York, I had an instinct that Ted Cruz could not win states like Pennsylvania, Michigan – Donald Trump could.”

Trump’s brand of fiery rhetoric and stance on immigration appealed to the average Kingman voter.

“This is a very conservative area,” says Schiff, who complains about the “Californisation of Arizona”, a reference to the new wave of immigrants who have moved to the greater Phoenix area in recent years bringing their Democratic politics with them. “There are 57 churches in this region, and growing,” says Schiff, who believes that many Republicans vote for Trump for social reasons rather than economic.

“You have a situation where a lot of people are Medicaid recipients – essentially receiving money from the government, which is not very Republican, but their reason for voting Republican is different,” he says.

The appointment of conservative justices and gun rights are big issues for voters, says Schiff, who carries a revolver openly (Arizona has one of the most liberal gun regimes in the country).

As we speak, a customer at the next table interrupts. He is from Idaho and visiting his daughter who lives in Kingman. “If you’re talking about president Trump, he’s going to win again for sure,” he says. “He talks straight and he actually get things done.”

An owner of two businesses, he says he has voted Republican all his life, but believes the Republican Party has moved too far to the left. “Republicans weren’t following through, Trump is.”

Schiff agrees that Trump will be a two-term president. “Trump is going to win in 2020, absent something tremendous happening,” he says. “Firstly, the economy is strong, and that’s a huge driver, secondly, I don’t think Democrats are going to do as well as they hope.”

He highlights a recent judgment by an Arizona court upholding a law outlawing what he terms “ballot harvesting” – the practice of bringing someone else’s early ballot to a polling station, which he claims was the source of widespread voter fraud by Democrats.

But mostly, he believes that conservative voters are pleasantly surprised that Trump has followed through on a conservative agenda. “There was a certain amount of suspicion here at first, suspicion at Trump’s motives. Many believed that this New Yorker wasn’t really a conservative and would change once in office, but that has not happened. More and more people are coming round to Trump.”

Outside on Beale Street, Schiff’s optimism appears well-placed. Karl Kettlehut runs an antique store on the main thoroughfare. He has lived in Kingman for 50 years. Like the vast majority of people in this community he voted for Trump in 2016.

Though he says he is uncomfortable about the policy of separating families at the border, he still believes that Trump is the best person to lead the country. “I think what he has done in North Korea is a great thing. My own son is in the military and spent time there,” he says, as he sits among the figurines and old furniture in his store. “Yes, I will probably vote for him again.”

Further down the street outside a local hair salon, Kathy, a Kingman resident in her 50s, also says she supports the president. “I feel sorry for the children too at the border, but we have to take a strong stance on immigration. It’s about time someone followed through and did something about our immigration system.”

But most of all, she feels the problem is not Trump but the media. “They just won’t give him a break. He is trying to get things done, but Congress is stopping him. I think they need to give credit to someone who is trying to shake things up. He’s doing a great job.”

Tomorrow: Suzanne Lynch reports from the swing state of Nevada, where the Democrats hope to make gains in this year’s elections