How America learned to stop worrying and love the budget deficit

US Politics: The US public – and its politicians – has lost its appetite for budget-balancing 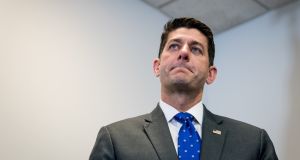 House Speaker Paul Ryan is newly relaxed about deficits he once saw as the beggaring of American youth. Photograph: Erin Schaff/New York Times

Nothing dates the 1990s as much as the conscientiousness of its public life. The US agonised over scandals that would struggle for air time now. Operational squabbles during the Balkans interventions counted as discord with allies. And the ogre of the day was, Democrats and Republicans agreed, the budget deficit. In retrospect, the “holiday from history” was not so complacent.

If scandal and brusqueness abroad have assumed new magnitudes, then at least it is the stuff of political controversy. Americans discuss it. Some will protest by voting against Congressional Republicans in November.

It is the collapse of fiscal conservatism that is being normalised with a shrug and a yawn. Democrats are campaigning against the inequitable distribution, more than the aggregate cost, of Donald Trump’s deficit-widening tax cut. Republicans, such fiscal worry warts under Barack Obama, roll around quite happily in the red ink spilt by their own president.

It is natural to locate the blame right here: at the level of high politics. Paul Ryan, the speaker of the House of Representatives, and Mick Mulvaney, Trump’s budget director, newly relaxed about deficits they once saw as the beggaring of American youth, stand out as exemplars of Republican bad faith.

But to blame Washington is to skirt the underlying problem: the public. Americans no longer care about deficits, or at least no longer care enough. Their concern about them has waned since the mid-1990s, according to Pew research.

Over the period, sure enough, they have neither rewarded frugal parties nor punished lax ones. The prize for president Bill Clinton’s sound budgeting was the election of George W Bush, who cut taxes while expanding subsidies for prescription drugs. Not only does the deficit now rank 14th on voters’ list of priorities, but most of those above it (such as “securing Medicare”) imply, in the absence of tax rises, yet more borrowing.

The problem is not the present size of the deficit, then, which even as it swells almost a decade since the most recent recession is yet to spook investors. The problem is national insouciance about the deficit. It is a deeper obstacle to fiscal adjustment than the Beltway chicanery of a Ryan or a Mulvaney.

A kind of folk consensus is settling that America can prosper despite its public finances, like a macrocosm of California in the noughties, when tech companies remade the world as the state that hosted them reeled from budget crisis to budget crisis.

If the public will not go along with fiscal retrenchment, then nor, even, will the Democrats. The left has come to see its party as the too-nice sap of American politics. There is growing impatience with moderation in thought and manners, which is why Trump officials can no longer count on a quiet night in a Washington restaurant.

A candidate in Democratic primaries – for the midterms, but also for the presidential election in 2020 – has to reckon with these emboldened activists. None of them fantasise, as Clinton adviser James Carville once did, of reincarnation as the bond market.

They feel electorally empty-handed for all the scrupulous deficit-cutting under Clinton and (once the crash faded) Obama. They have expensive priorities, often to do with healthcare. And they have their wider electorate with them: the drop in concern about the deficit since 1994 is much steeper among Democrat-inclined voters than Republican-leaners.

The intellectual effect on the party is already plain. A Better Deal, its platform for the midterms, is thin on the deficit. Campaign directors are relying on sheer turnout among committed Democrats to win (at least) the House. These voters are not mobilised with pledges of 1990s-era prudence.

Nor, it seems, are their compatriots. In making ends meet, the US has the special advantage of the world’s reserve currency. But like most privileges in life, it can soften the will even as it protects. The public’s appetite for the hard work of budget-balancing is unrecognisably lower than a generation ago, and falling. To stand against this trend would take a farther-sighted class of politician than the US has seen for a while. – Copyright The Financial Times Limited 2018

Trump says Covid-19 will disappear after US reports record increase 06:54
Leicester lockdown could be just the start if tracing system not improved – Labour 22:30
Trumps to travel to South Dakota for July 4th despite rise in US coronavirus cases 20:33
World takes stock of Covid-19 drug after US snaps up supplies 20:24
Netanyahu misses target date for annexation of Palestinian territories 19:45

1 Bobby Storey: The IRA's planner and enforcer who stayed in the shadows
2 Full line up of junior ministers unveiled as Taoiseach accused by one TD of snub
3 Open Ireland as soon as possible - Tourism chief warns of 'catastrophic' impact of pandemic
4 Who are the new junior ministers? All their profiles are here
5 Leaders spark anger as they look west for junior minister carve-up
Real news has value SUBSCRIBE