Donald Trump seeking to close door on all immigration to US

Janan Ganesh: Cutting number of legal immigrants will be next 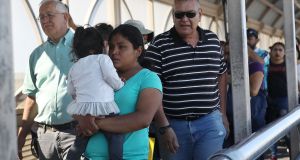 The southern border is the current seat of US anxieties, but the migration debate does not stop there. Photograph Joe Raedle/Getty Images

Large countries nurse an insecurity of their own. Their size promises power but their endless borders gift the outside world opportunities for incursion. The resulting spirit – half-brash, half-fearful – marks the politics of Australia, Russia and, most vividly right now, the US.

Its southern frontier is the nearest thing to geographic bad luck in a land otherwise screened from the world’s troubles by oceanic distance (or, as it is known here, Providence).

It is this deep-set fear that drives a government to prise illegal immigrants from their blameless offspring. None of the merely political motives attributed to President Donald Trump add up. As a campaign theme for November’s midterm elections, immigration distracts from the Republicans’ preferred focus on the strong economy. Footage of confused children in foil bed sheets has roused the distaste of most voters.

If this was a Beltway ruse to force Democrats to give Trump his wall on the Mexican border, then it was a ruse that Republican legislators – such as South Carolina senator Lindsey Graham – were not in on.

No, Trump did it because he meant it. Family separation is not a stratagem or liberal-baiting run amok. It is a sincere act by people who think their republic is at stake. And once the seriousness of their intent is understood, it becomes clear where this is going. We are headed towards a campaign against immigration of the perfectly legal kind.

The government’s most conservative figures, such as Stephen Miller, Trump’s 32-year-old adviser, believe that American nationhood is compromised by the raw volume of immigration, not just by the illegality of some of it. They know that the country’s openness has waxed and waned over 200 years, and want to bring about a downward phase in the cycle, locking it in as a decades-long consensus that would be hard for future governments to buck.

According to the US Census Bureau, America’s foreign-born population rose from 5 per cent of the total in 1970 to 13 per cent in 2010. This amount is unexceptional by rich-world standards (ask the Swiss) but it is higher than anything the US has seen since the 1920s, when anti-immigrant sentiment prompted a tightening of the laws.

Since the likes of Miller regard the mid-20th century as the Belle Époque of the American worker, who was spared wage competition and cultural unease, they would like immigration to fall back to those halcyon levels. But it is impossible to return to anything like that extent just by blocking illegal entrants. The state would have to admit fewer people overall, however procedurally proper their method of arrival.

The means of doing this are already entering legislative discourse, if not the statute book. Two conservative immigration Bills about to come before Congress are drawing attention for what they say about the wall and the treatment of “Dreamers”, whose parents brought them to the US unlawfully as children. But the most telling provisions are to do with legal immigration.

Ideas include an end to diversity visas (which go to applicants from countries that send few people to the US) and curbs on American citizens who want to bring relatives over from the old country. Tests for asylum could harden, too. Even the gentler of the Bills will struggle to win passage, but the gradual change in political focus – from the wall to legal migration – is unmistakable.

The debate over family separation seems unlosable for liberals. The state cannot distress children and expect a hearing. “As a parent . . .” has displaced “As a Christian . . . ” as the most pious overture to a modern American sentence. Even members of the administration have been incoherent in defence of the policy. But the coming debate will be much harder for liberals.

It is a conversation about how open the US should be in general. It will arrive after almost half a century of laudable but exhausting openness. The immigrants in question will be adults. There will be no footage of cruel borderlands redolent of a Cormac McCarthy adaptation, just the cold rustle of bureaucracy as formal avenues into the US gum up. And while Miller is easy to write off as a maverick, his instincts on legal immigration are not rare among more seasoned conservatives.

They will claim, more in sorrow than in anger, that there is a natural upper limit to the share of foreign-born people, above which the US has in the past failed to venture without compromising the togetherness of the nation.

It is an argument to which Democrats must prepare an answer. The southern border is the current seat of US anxieties, but the migration debate does not stop there. – Copyright The Financial Times Limited 2018