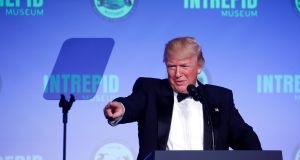 The Irish media have a responsibility to call out Donald Trump as a liar and not let a fear of damaging the State’s relationship with the US prevent journalists from promoting facts over fiction, the head of the UCD Clinton institute has said.

Prof Liam Kennedy, chairman of the UCD Clinton institute, said he feared the international media was failing to stand up against the American president, who he said was successfully manipulating and altering the way people consumed news.

“As educators we’re interested in evidence and facts and creating a narrative that will help people understand these facts. In other words, we need a free flow of information that we can trust. We don’t have that any more in the United States and that is proving dangerous.”

Alireza Hajihosseini, one of the speakers at the UCD Clinton institute’s conference Trump’s America on Friday, said the belief that emerged a few years ago that mass participation on social media would lead to mass enlightenment had not been realised.

“Just because people have a lot more access to news sites and sources, that doesn’t mean they know more,” said Mr Hajihosseini in a discussion on the so-called post-truth era. “People are cherry-picking what fits in with their world view.

“We’re not living in normal times; we’re facing the fall of the gatekeeper. Producers in newsrooms no longer decide what news you watch at 5pm. You wake up and go on Twitter or Facebook and that’s where you consume your news. People are sticking to the narrative they feel most comfortable with.”

Dr Sarah Arnold of Maynooth University argued that liberal female voters must avoid demonising white women for electing Mr Trump as president and stop portraying them as “victims” of misogyny and patriarchy.

Dr Arnold warned that remarks made by high-profile, left-wing female actors and musicians in the wake of the US election, including Lena Dunham and Madonna, were creating a hateful and dismissive debate around the women who chose to vote for Mr Trump.

“Sexism exists within groups of women as well,” she said. “Those women who feel they’ve liberated themselves from objectification are diminishing the beliefs of others. The women who use that kind of language, who call [female Trump voters] insane, internalised misogynists, self-haters, they’re invoking the age-old assumptions about women and hysteria. They’re validating stereotypes about other women in order to empower themselves.”

Also speaking on the role of women in the election of Mr Trump, Prof Maria Pramaggiore of Maynooth University highlighted the vital role Ivanka Trump played in “softening” the public perception of her father and acting as the “secret weapon” in his presidential campaign.

Ivanka Trump’s experience as a working mother successfully attracted white female voters from across the US, while her relationship with her father revealed Mr Trump’s capacity for tenderness, said Prof Pramaggiore. She added that the media’s portrayal of the first daughter as “the great white hope” for the next four years only further cemented the presidential dynasty of the Trump family.