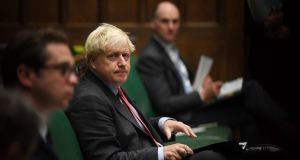 The UK Internal Market Bill, which would enable British ministers to break international law by reneging on parts of the Brexit withdrawal agreement, has passed its latest stage in the House of Commons.

MPs did not approve any opposition amendments but the government introduced a change that would give them a vote before any treaty-breaking clauses were to be triggered.

SDLP leader Colum Eastwood said the amendment did not make the Bill any more acceptable to the opposition parties and that it was fundamentally unfixable.

The Foyle MP warned that the Bill, which aims to ensure that the internal UK market functions properly after the end of the post-Brexit transition period, could adversely affect cross-Border workers in Ireland. It guarantees mutual recognition of professional qualifications but only for those resident in the UK.

“These clauses will mean that someone who works in, for example, Derry, but who lives in Donegal may be unable to work on projects that are UK-wide because their residency is in the Republic of Ireland,” he said.

“I sometimes wonder whether people who write these Bills actually have any understanding of life in a border area. I would prefer it if they came to our Border areas, saw what it is like, and tried to understand what it is like for frontier workers and for the rest of us who work and live across that Border every single day.”

In his speech to Labour’s virtual annual conference on Tuesday, Keir Starmer said Boris Johnson’s threat to break international law was an expression of his failure to keep his government’s promise on Brexit.

“British business needs a deal. Working people need a deal. Our country needs a deal. And if the prime minister fails to get one, he will be failing Britain. If that happens, he’ll have nobody to blame but himself. And he will have to own that failure. It will be on him. We want to get this deal done, and like everybody else, we’re growing tired of the prime minister’s bluster,” he said.

The Northern Ireland Assembly on Tuesday approved a motion rejecting the UK Internal Market Bill and mandating Arlene Foster and Michelle O’Neill to take up a position opposing it.

SDLP South Belfast MLA Matthew O’Toole, who tabled the motion, said the UK government was developing a reputation as an irresponsible actor on the international stage. “But let us be clear that this Assembly rejects the Internal Market Bill, upholds the principles which have underpinned our institutions and affirms that commitments made in peace agreements and international treaties should not be the plaything of demagogues,” he said.