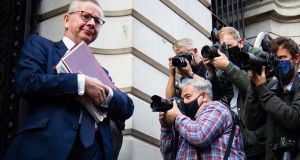 British chancellor of the Duchy of Lancaster Michael Gove will attend a meeting of the joint committee for implementing the Northern Ireland protocol, on which his government is threatening to renege. Photograph: Aaron Chown/PA

British cabinet office minister Michael Gove will be in Brussels on Monday for talks about the Northern Ireland protocol at the start of a week both sides have characterised as a crucial one for negotiations on a post-Brexit trade deal.

Gove will attend a meeting of the joint committee responsible for implementing the protocol, which his government is threatening to renege on if it does not get its way in negotiations.

The EU has warned of legal consequences if the British government does not withdraw clauses in its UK Internal Market Bill giving ministers the power to breach the withdrawal agreement. But the Bill will pass all its stages in the House of Commons on Tuesday, a day before the deadline given by EU Commission vice-president Maros Sevcovic.

Any infringement proceedings against Britain for breaking its treaty obligations will run alongside negotiations between Michel Barnier and David Frost on a trade deal, which will enter their ninth round this week. Frost said at the weekend informal talks between the two sides have been positive but that much remains to be done in a short time.

“If the gaps in these areas are to be bridged, the EU still needs to scale back more of its unrealistic ambitions and work on more realistic policy positions. I hope this will be possible this coming week, and I and my team are ready to work as hard as necessary to move things forward,” he said.

The three sticking points remain the same: fisheries; state aid rules; and governance or dispute resolution. Fisheries remains a politically sensitive issue in Britain and for a number of EU member states, and the question of governance has become more important for the EU since London announced it was planning to renege on the withdrawal agreement.

But the most intractable issue has been state aid – the rules governing how governments can subsidise businesses. The EU made a major concession during the summer, dropping its demand that Britain should continue to follow European state aid rules.

It is now asking Britain to set out what its state aid rules will be after December 31st, to outline the terms on which an independent, domestic regulator would operate, and to agree a robust dispute-resolution mechanism with the EU.

After the EU made its concession, Barnier expected Frost to move too but there has been no progress on the issue and their dinner in London last week bore no fruit. There is little hope in Brussels of a breakthrough this week and no sign in London that Frost is about to budge.

If Britain does not move towards the EU’s position on state aid, there will be no deal and the end of the transition period will bring serious disruption to the British economy. It will hurt EU member states too, including Ireland, but the biggest cost will be borne by Britain, where a no-deal outcome would hurt the parts of the economy which have been least affected by coronavirus.

Boris Johnson, whose Conservative party fell behind Labour this weekend for the first time since last year, faces a backbench revolt this week about coronavirus restrictions. Gove last week outlined a “realistic worst-case scenario” which could see 7,000 lorries queuing at Dover every day.

Johnson’s threat to breach the withdrawal agreement threatens to complicate his relationship with Joe Biden if the Democratic nominee wins November’s US presidential election. And the British administrative state, already struggling to cope with the impact of coronavirus, could be stretched beyond its capacity by a no-deal scenario at the end of December.

The EU’s legal action against Britain for breaching the withdrawal agreement is unlikely to remain separate from the trade negotiations indefinitely but it is theoretically possible that a trade deal could be agreed while the legal case remains unresolved.

The mandate Barnier received from EU leaders says “the negotiations of the envisaged partnership should be premised on the effective implementation of the withdrawal agreement and of its three protocols”, adding that the future partnership should protect the Belfast Agreement. That clause is open to interpretation and there is a risk for Ireland that if a trade deal is in sight, the issue of implementing the protocol could be left to the future.

That could leave the Taoiseach in the unhappy position of choosing between blocking the treaty and trusting Johnson to fulfil his obligations. But for that dilemma to present itself, Britain must first make its move on state aid and there is no sign of that happening this week.