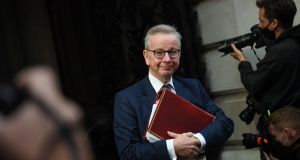 Michael Gove: he said the permit system would be enforced by police and by number plate recognition. Photograph: EPA/Neil Hall

Lorry drivers crossing county boundaries into Kent after the end of the Brexit transition period will need a “Kent access permit” or face police action, Michael Gove has told MPs.

Mr Gove, the cabinet office minister responsible for Brexit planning, said the permits were necessary to reduce congestion as lorries queue to board ferries to mainland Europe.

“We want to make sure that people use a relatively simple process to get what will become known as a Kent access permit, which means that they can then proceed smoothly through Kent because they have the material required,” he said.

Mr Gove said the permit system would be enforced by police and by number plate recognition.

He was answering a question from Damien Green, the Conservative MP for Ashford in Kent, after telling the House of Commons that in a “reasonable worst-case scenario” there could be queues of 7,000 lorries waiting to cross the channel.

“The prospect of 7,000 trucks queuing to cross the channel will send a chill through my constituents because we know the disastrous effect that has on all the roads in Kent,” Mr Green said.

Mr Gove said easing congestion would depend on co-operation between Britain and the EU, and on the support of the road haulage industry. However, industry representatives criticised the government’s lack of preparation for changes that will come in three months’ time even if a free trade deal is agreed.

“There is no point pretending it’s going to be smooth – we are heading for major delays and disruption. Systems are not ready, processes are unclear, awareness of what will be required is low across the industry. We will need calm heads and a willingness from customs, food and security officials to make sensible, pragmatic, decisions, probably throughout 2021 as systems bed down and new ways of working emerge,” said Shane Brennan, chief executive of the Cold Chain Federation.

Labour’s Rachel Reeves said the estimate of 7,000 lorries queueing in Kent showed that the government had failed to prepare for the reality of Brexit.

“I know the government has said that they are committed to building new infrastructure, but I didn’t realise it meant concreting over the Garden of England. Today’s warnings are based on a reasonable worst-case scenario, but given we have a reasonable worst-case government, we have to assume that these scenarios will play out quite soon,” she said.

“Why aren’t the essential prerequisites for a smooth transition not already here? It is all well and good to tell businesses to act now, but without the systems in place, frankly, it is like telling me to bake a cake but forgetting to turn the oven on.”

Mr Gove will be in Brussels on Monday for a meeting of the joint committee tasked with implementing the Northern Ireland protocol.