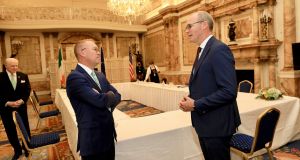 Donald Trump’s envoy for Northern Ireland has downplayed the risk of a UK law threatening the peace agreement saying the bill was “a safety net” in case no EU-UK trade deal is agreed.

US special envoy Mick Mulvaney said that Britain’s Internal Market Bill was a “contingent plan” that “would only become relevant if there is no underlying, larger EU-UK agreement.”

The relevance of the bill, which the UK has said would breach the Brexit withdrawal agreement, would be become “more relevant” with every passing day no trade deal was agreed.

“It is contingency plan. It is a safety net that would only become relevant if there is no underlying, larger EU-UK agreement,” said Mr Mulvaney on his first visit as envoy to Dublin.

The “contingent nature” of the bill is “lost on too many folks,” he said.

Ms McDonald said she had a “very useful” meeting with Mr Mulvaney.

She said she reiterated her “big appreciation” for the support for the Belfast Agreement and the rule of law from the US.

Asked if Mr Mulvaney had given any commitments about the Trump Administration’s position if there is a no-deal Brexit, Ms McDonald said that he had “reiterated their stance which is to support the Good Friday [Belfast] agreement which is to ensure there is no hardening of the border in Ireland.”

She said the “ball is very much in the court of number 10 Downing St and we have a limited amount of time for the British government to step back from the brink.”

EU and UK officials meet this week for the ninth round of negotiations on a future relationship as the clock ticks down to the expiry of the standstill transition period at the end of the year.

The UK government has introduced the Internal Market Bill that could overrule the Brexit deal by not adhering to state aid rules and export declaration arrangements for Northern Ireland.

Speaking a day after meeting Northern Ireland secretary of state Brandon Lewis in Belfast, Mr Mulvaney said that he and Mr Lewis still believe that a trade agreement was possible by the end of the year because “everyone recognises that the stakes are too high to have nothing.”

“We have a situation where there is so much to be lost by not having an agreement, politicians usually muddle together at the end to get an agreement. It is not pretty and it is certainly not efficient. To an outsider, it looks like a big breakdown in process but that is the process,” he said.

The envoy, an Irish-American, said he believed the British government was “intimately familiar with the fragility of the peace process in the North.”

Mr Mulvaney said he pressed Minister for Foreign Affairs Simon Coveney during their earlier meeting on Monday morning on whether Europeans “shared an awareness” of the risks of the reimposition of a hard border on the island of Ireland.

Mr Mulvaney said one of Mr Coveney’s assistants pointed out that one Portuguese minister had said “the price of fish in Portugal is not as important as peace in Ireland.”

The former Republican congressman and one-time acting chief-of-staff to Mr Trump said Democrats should temper their views that the UK bill could threaten the 1998 Belfast Agreement.

“Could it play a role in moving in that direction? Yes, which is why I am here to reflect my government’s commitment to the Good Friday accords.”

US Speaker of the House of Representatives Nancy Pelosi and other Democrats have warned that they will not agree to a future US-UK trade deal if Brexit imperils the Belfast Agreement.

Mr Mulvaney said he last spoke to Mr Trump about Northern Ireland about a month ago but he was reporting back to Mr Trump’s national security adviser Robert O’Brien later today and that he was also in regular contact with the White House chief of staff Mark Meadows.

“The president is concerned about protecting the Good Friday Agreement. It has served so well for such a long period of time and was earned at such a high cost that we don’t want to go backwards from that,” he said.

Asked about Democratic presidential contender Joe Biden warning that that agreement could not become “a casualty of Brexit”, Mr Mulvaney said he was “right to raise” the “existence of that path” to a failure of the peace deal “if things go down” but he was hopeful it would not happen.

“It was appropriate for American politicians to raise the issue. But in the next breath, I think and believe that everyone’s also trying to work to make sure it’s it’s something that does not come to pass,” he told reporters in Dublin.

Mr Mulvaney said the idea of the Government inviting the US president to Ireland on St Patrick’s Day in 2022 to mark the centenary of independence - as proposed by Fine Gael Clare TD Joe Carey – was a “fabulous” and “tremendous” and he would help push the idea back in the US.

“Getting the president to come here is like pushing against an open door,” he said.