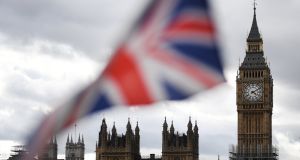 MPs on Monday continued to debate the European Union (Withdrawal) Bill, with a vote on its second reading expected early on Tuesday morning. Photograph: Andy Rain/EPA

Britain will on Tuesday offer to contribute military assets to European Union operations, co-operate on sanctions and agree joint positions on foreign policy as part of a new security partnership after Brexit.

In its latest Brexit position paper, Theresa May’s government will call for a pooling of British and EU assets and capabilities in a security partnership “deeper than any other third country and that reflects our shared interest”.

Britain has bigger defence and development budgets than any other EU member state and its diplomatic and intelligence services are among the most extensive in Europe. Brexit secretary David Davis said the position paper would highlight Britain’s desire to use its assets and capabilities in partnership with the EU.

“After we leave the European Union we will continue to face shared threats to our security, our shared values and our way of life. It’s in our mutual interest to work closely with the EU and its member states to challenge terrorism and extremism, illegal migration, cyber-crime, and conventional state-based military aggression,” he said.

Foreign secretary Boris Johnson said Britain would pursue a global foreign policy after Brexit, adding that its commitment to European security would be undiminished.

“In recent years, the European Union has helped achieve crucial foreign policy goals – from bringing Iran to the negotiating table, to uniting in response to Russian aggression in Ukraine. We want this EU role to continue after we leave. This is why, in addition to stronger relations with EU member states, we also envisage a strong UK-EU partnership on foreign and defence policy following our departure. This will allow us to continue our work in tackling the shared challenges we face worldwide,” he said.

MPs on Monday continued to debate the European Union (Withdrawal) Bill, with a vote on its second reading expected early on Tuesday morning. The government was confident of winning that vote but a number of Conservative MPs urged ministers to consider amendments during the committee stage next month.

The legislation repeals the 1972 Bill which brought Britain into the European Economic Community and translates all EU rules into British laws. Criticism of the Bill has focused on the use of Henry VIII clauses to allow ministers to amend laws, with one Labour MP describing parts of it as “clauses Erdogan, Maduro and Putin would be proud of”.

Conservative rebels were preparing to support the government on the Bill’s second reading, and some Labour MPs said they would also vote in favour of it, in defiance of their party whip. Rebels in both parties warned, however, that they would back amendments designed to ensure that the Bill will not be a power grab by government.

In a statement later, the party said its position had not changed.