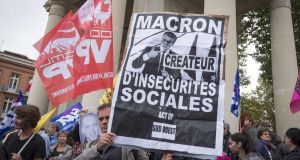 French president Emmanuel Macron has antagonised opponents to his labour reforms, denouncing them as “slackers” shortly before the first mass demonstrations against his administration on Tuesday.

During a speech to the French community in Athens, Greece, on Friday, Mr Macron said: “I will be absolutely determined. I will not give in at all, neither to the slackers, nor cynics, nor the extremes.” The comment provoked an outcry from critics.

Presidential staff tried to soften the effect of the remark. When Mr Macron said “slackers”, he was talking about “those who didn’t have the courage to make the necessary reforms over the last 30 years”, said Christophe Castaner, the government spokesman, referring to previous presidents Jacques Chirac, Nicolas Sarkozy and François Hollande.

But the storm of negative reactions continued. Jean-Luc Mélenchon, the leader of the far-left France Unbowed party and the de-facto main opponent to Mr Macron, used the president’s comment as a rallying cry, tweeting: “Fools, cynics, slackers, all in the street on September 12th and 23rd!”

The communist trade union CGT has organised 180 protest marches across France on Tuesday, September 12th, and further marches on September 21st. Mr Mélenchon’s party will stage its own protest on September 23rd.

Philippe Martinez, the head of the CGT, said he was “scandalised” by Mr Macron’s remark.

In his blog, Mr Mélenchon accused the president of launching “a volley of insults against the French people”, of attacking “the French model” and addressing “messages of collusion to the European caste”.

“What contempt! What ignorance!” tweeted Martine Aubry, the Socialist mayor of Lille, following the comment. Benoît Hamon, the failed Socialist presidential candidate, called the remark “immature” and “unworthy of a president of the republic”.

Mr Macron on Monday undid the work of his aides, who had sought to convince journalists that the president was not referring to demonstrators, trade unionists or working people in general.

“My speech was very clear,” Mr Macron said on a trip to Toulouse. By “slackers”, he meant “all those who think things mustn’t change in Europe and in France”. People were “wrong to distort and create false controversies”, he added.

Tuesday’s protests will disrupt train services, the Paris Métro and air-traffic control. CGT federations in the energy and petroleum sector have also called on members to strike. Mr Martinez said the number of strike orders was the sign of “the effervescence of very strong discontent”.

The reforms are intended to unblock the French labour market by making it easier to hire and fire employees. The National Assembly voted last month to allow Mr Macron to pass the measures by decree. The president has promised to reduce unemployment from 9.5 per cent to 7 per cent during his term of office.

Fortunately for the Macron administration, the opposition is divided among themselves. Mr Mélenchon and Mr Martinez were not able to agree on a joint protest, which is why the CGT and France Unbowed are marching on different days.

Street protests could become a semi-permanent fixture of the Macron presidency, given his plans. After the labour reform will come €20 billion in budget cuts, followed by the reform of unemployment insurance, professional training and pensions.