Catalans take to the streets in support of independence vote 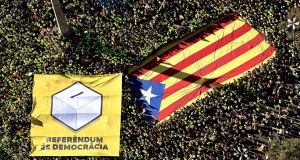 Hundreds of thousands of Catalans filled the streets of Barcelona on Monday to assert their right to stage an illegal independence referendum, despite the central Spanish government’s threat of legal action over the vote.

Catalans traditionally celebrate every September 11th, the date of their Diada, or national day. However, since 2012, when the Catalan independence movement entered the political mainstream, the date has taken on added meaning, with nationalists using the day to express their anger at Madrid and desire to vote on separation.

This year, the date fell shortly before the referendum the Catalan government is planning for October 1st and which it hopes will lead to an independent Catalan republic. However, Mariano Rajoy’s Spanish government has promised to block the vote, deeming it unconstitutional, and has already taken steps to thwart it.

“We’ve been fighting a long time, we think now is the moment,” said Gérard García, a dreadlocked 19-year-old who had come to Monday’s event with friends. “We want democracy, we don’t want dictatorship and we are fighting for freedom.”

García and his friends closed their eyes and raised their fists as they joined crowds in the street to sing the Catalan anthem, Els Segadors.

Participants formed a massive human cross in central Barcelona and many wore lime-green T-shirts with the word “Sí” (“Yes”) on the front, in reference to the upcoming vote.

Félix Villar was wearing the red-and-yellow striped Catalan independence flag as a cape and on his head, while his partner had also covered their baby’s pram with the flag. “We want to show the rest of Spain that despite what is sold to them in the media, this is the reality,” he said.

“They say that there isn’t a [pro-independence] majority, that Catalans don’t really want independence, that it’s something the Catalan government decided. That’s not true – the people decided to do this.”

A Metroscopia poll published on Sunday showed that 38 per cent of Catalans want the Catalan government to continue with its plan to stage a unilateral referendum, while a majority wants it to negotiate with Madrid. Other recent polls have shown Catalan support for independence to be slightly lower than support for a united Spain.

Last week, in a contentious move, the region’s pro-independence majority altered the local parliament’s schedule to push a law paving the way for the referendum through the chamber. It also approved another Bill laying out the framework for an independent state. The central government responded by appealing against both measures and warning it will take firm legal action to prevent the vote from taking place.

Then on Saturday, the civil guard searched the premises of the publication El Vallenc in the town of Valls for allegedly harbouring electoral material, although nothing was found.

“Today we have once again given an example of civility and democracy, that’s six [massive mobilisations] in a row,” said Jordi Sànchez, of the Catalan National Assembly (ANC), which organises the Diadas, on Monday.

When asked, Catalan premier Carles Puigdemont told reporters that he does not expect to be arrested before the vote. “I’m not afraid because that’s not going to happen,” he said.

The Socialist mayor of L’Hospitalet de Llobregat, Núria Marín, reprimanded Mr Puigdemont on Monday for telling Catalans to pressure their political representatives to allow them to vote. “Let’s see if you leave us mayors in peace,” she told him, when the two met during an official ceremony.