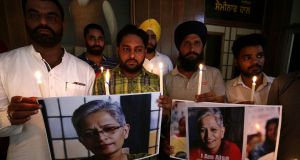 Members of the National Human Rights and Crime Control Organisation hold candles along with photographs of Indian journalist Gauri Lankesh during a vigil in Amritsar, India. Photograph: Raminder Pal Singh/EPA

Police in India have made little progress in investigating the killing of senior journalist Gauri Lankesh in Bangalore last week, despite posting a Rs1 million (€13,000) reward for information regarding her shooting.

Instead, a fierce political row has erupted over the journalist’s murder, between the opposition Congress party, which rules the state Karnataka, of which Bangalore is the capital, and the Hindu nationalist Bharatiya Janata Party (BJP) federal administration.

Minister of law Ravi Shankar Prasad blamed the Karnataka state authorities for failing to provide security to Lankesh, who had reportedly been under threat from armed Maoist rebels fighting for the poor and dispossessed in central and eastern India.

However, state chief minister Siddaramaiah (who uses only one name) said that Lankesh (55) had never sought security and was killed for other, unspecified reasons.

Lankesh was shot dead as she got out of her car to open the gate to her house in a Bangalore suburb last Tuesday evening.

Her two assailants escaped on a motorcycle. One of the attackers was captured on CCTV installed at Lankesh’s gate, wearing a crash helmet. Neither of the two has been identified.

Lankesh edited the family-owned Lankesh Patrike weekly journal, published in the local Kannada language, and was a fierce critic of the BJP and its associated web of Hindu right-wing organisations, which she openly accused of pursuing narrow sectarian politics.

Several BJP supporters celebrated Lankesh’s death on social media, referring to her in abusive terms and warning other activists, rationalists, journalists and writers of a similar fate if they propagated similar views.

Even prime minister Narendra Modi came in for widespread media criticism last week for following people on Twitter who had expressed happiness at Lankesh’s death.

Lankesh’s murder has highlighted the danger Indian journalists increasingly face, principally from political parties. According to the national crime records bureau, 70 Indian journalists and activists have been killed in 140 attacks since 2015.

The Hindu newspaper has said that the “use of violence to silence political or ideological opposition, and inhibit the freedom of expression, is a reality”.

Over the past year, India has slipped three places to 136th position out of 180 countries in press freedom rankings released by Reporters Sans Frontières, putting it three places above Pakistan and one above Palestine.

India’s neighbours Nepal and Bhutan were placed at 84th and 100th respectively.

In a report, the journalist watchdog organisation said that with “Hindu nationalists trying to purge all manifestation of anti-national thought from the national debate . . . [Indian] journalists are increasingly the targets of online smear campaigns by the most radical nationalists, who vilify them and even threaten physical reprisals.”

Meanwhile, 18 writers, journalists and activists across Karnataka, many of them BJP critics, have now been provided with police protection.