There oughta be a law . . : Donald Trump’s off-the-rails presidency 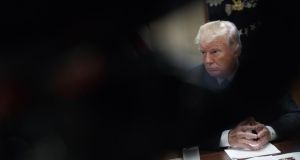 Donald Trump: Twenty months into the job, the US president has yet to grasp that the highest law of the United States is its constitution, not whoever occupies the Oval Office at any given moment. Photograph: Tom Brenner/NYT

President Donald Trump has never handled criticism well, but this past week has proved especially challenging. First came the portrait of Trump in a new book by Bob Woodward – a scathing account featuring anonymous members of Trump’s own administration characterising him as “an idiot”, “a professional liar”, the mayor of “Crazytown” and a clueless, hopeless man-child with the comprehension of a “fifth or sixth grader”. A day later a second blow landed: an op-ed article in the New York Times, by an anonymous senior administration official, that recounted how members of Trump’s team had worked to protect the nation from his “worst inclinations”.

Trump quickly corroborated these accounts by demonstrating precisely the sort of erratic, anti-democratic behaviour that is driving administration officials to come forward with their concerns. He ranted that the stories were all lies and raved that the gutless traitors who had slandered him must be rooted out and handed over to the government. Finger-pointing, name-calling, wild accusations, cries of treason: it was an unsettling display, not simply of Trump’s emotional fragility and poor impulse control but also of his failure to understand the nature of the office he holds, the government he leads and the democracy he has sworn to serve.

Someone with the president’s best interests at heart may want to explain that the constitution protects political expression, no matter how befuddling some find it

Twenty months into the job, Trump has yet to grasp that the highest law of the United States is its constitution, not whoever occupies the Oval Office at any given moment. His blind spot for the constitution has been much on display in other ways in recent days. Asked about protests that erupted during this week’s confirmation hearings for his Supreme Court nominee Brett Kavanaugh, Trump expressed dismay and puzzlement: “I don’t know why they don’t take care of a situation like that. I think it’s embarrassing for the country to allow protesters. You don’t even know what side the protesters are on.”

Someone with the president’s best interests at heart may want to explain to him that the first amendment to the constitution specifically protects political expression, no matter how befuddling some find it. Presidents do not get to outlaw speech simply because they find it distasteful.

Nobody should be allowed to burn the American flag - if they do, there must be consequences - perhaps loss of citizenship or year in jail!

Isn’t it a shame that someone can write an article or book, totally make up stories and form a picture of a person that is literally the exact opposite of the fact, and get away with it without retribution or cost. Don’t know why Washington politicians don’t change libel laws?

We cannot allow all of these people to invade our Country. When somebody comes in, we must immediately, with no Judges or Court Cases, bring them back from where they came. Our system is a mockery to good immigration policy and Law and Order. Most children come without parents...

This may seem like a familiar concept, but it is one with which Trump struggles. On the campaign trail in 2016, he argued that the protesters causing a ruckus at his rallies should be “thrown into a jail” and their lives ruined. “I hope you arrest ’em and do whatever you have to do,” the candidate told a crowd in Missouri. “And you know what? Once that starts happening, we’re not going to have any more protesters, folks.” No more constitution, either.

Three weeks after his election, President-elect Trump shared his take on flag burning: “Nobody should be allowed to burn the American flag. If they do, there must be consequences – perhaps loss of citizenship or year in jail!” Such a move may strike some people as a bold and patriotic step towards making America great again. It was ruled unconstitutional by the United States supreme court in 1990.

Another constitutionally protected right in the presidential cross hairs this week: freedom of the press. In response to Woodward’s book, Trump mused provocatively on Twitter, “Don’t know why Washington politicians don’t change libel laws?” No one enjoys criticism, especially from people who are considered supporters. Even so, it takes a special kind of leader to suggest that critical coverage should be handled by eroding the first amendment, as Trump has since early in the 2016 race, when he began vowing that, as president, he would “open up those libel laws” to punish media outlets that did “hit pieces” on him. Apparently, denouncing journalists as the “enemy of the American people” and whipping the crowds at his rallies into an anti-media frenzy is not enough to soothe Trump’s chronic sense of victimhood.

Mr President, we understand that you consider the constitution inconvenient at times. But if you continue to behave as you do, it’s only going to get worse

Also back in the news this week is Trump’s war on the NFL players protesting racial injustice and police brutality. In this case, Trump hasn’t moved to make kneeling during the national anthem explicitly illegal. He has simply slammed the protests as “disgraceful” and the players as disrespectful, unpatriotic “sons of bitches”, called on the offending players to be fired, suggested they maybe “shouldn’t be in the country”, stoked public rage against the entire league and toyed with the idea of punishing the league via the tax code.

Not all of the talk Trump is itching to do away with is, strictly speaking, protected political speech. When he learned last month that Michael Cohen, his former lawyer and long-time fixer, had cut a plea deal with federal prosecutors, Trump threw a fit, arguing that “flipping” – that is, co-operating in criminal investigations – wasn’t just disloyal and disgraceful but “almost ought to be outlawed”.

Trump has also advocated denying due process to immigrants seeking asylum. As he tweeted earlier this summer: “We cannot allow all of these people to invade our Country. When somebody comes in, we must immediately, with no Judges or Court Cases, bring them back from where they came.”

Mr President, we understand that you consider the constitution inconvenient at times. And we appreciate how vexing you find these subordinates sniping at you. But if you continue to behave as you do, and keep proving your harshest critics right, it’s only going to get worse. – New York Times