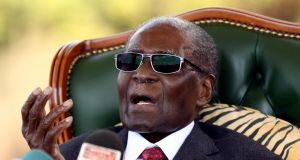 Zimbabwe’s former president Robert Mugabe (94) in Harare: “It was an election and his victory cannot be disputed,” he said of Emmerson Mnangagwa. File photograph: Siphiwe Sibeko/Reuters

Zimbabwe’s former president Robert Mugabe has said he accepts the results of the hotly contested general election, and urged his countrymen to move past the legal disputes that have characterised its aftermath.

In his first public comments since the July 30th ballot, the 94-year-old said that the ruling Zanu-PF party’s presidential candidate, Emmerson Mnangagwa, was the rightful winner of the poll despite opposition claims it was rigged.

“Mnangagwa won. It’s now constitutional,” he told mourners at his mother-in-law Idah Marufu’s funeral in Harare. “It was an election and his victory cannot be disputed. We now leave behind us the transgressions of yesterday,” he added.

Mr Mnangagwa won the presidential election with 50.8 per cent of the vote – just enough to avoid a run-off against the second-placed Movement for Democratic Change (MDC) Alliance candidate Nelson Chamisa, who secured 44.3 per cent of the ballots.

In August, Zimbabwe’s constitutional court dismissed a bid by the MDC Alliance to have Mr Mnangagwa’s victory annulled on grounds that the poll was rigged by the Zimbabwe Electoral Commission in his favour. Mr Chamisa has rejected that ruling and vowed to lead “peaceful protests”.

The former leader, who became president in 1980 after ending colonial rule, was ousted from power in a military takeover last November. That action by the army led to Mr Mnangagwa being appointed Mr Mugabe’s successor, both as Zanu-PF’s president and the nation’s interim leader.

Since then Mr Mugabe has refused to go quietly into retirement, and has instead taken a number of opportunities to publicly criticise the party he co-founded four decades ago and the manner in which Mr Mnangagwa replaced him.

In a surprise press conference on the eve of the election, Mr Mugabe slammed the military takeover, said the government was mistreating him, and said he would not vote for Zanu-PF because it had “tormented” him since he left office.

“But that is now in the past and everyone must dialogue and unite,” Mr Mugabe told the funeralgoers on Thursday, before adding: “We are now in a new era. Let us work together for our country.”

Mr Mugabe also revealed that former defence minister Sidney Sekeramayi was his preferred successor, and “those who staged the coup” last year were well aware of that.

Mr Mugabe’s apparent softening towards Mr Mnangagwa may to some degree be down to the latter’s decision to hire a private jet to fly his wife, Grace Mugabe, from Singapore to Zimbabwe, after her mother died suddenly last week.