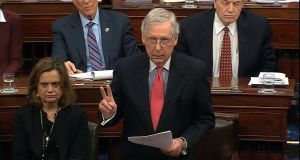 The US Senate on Wednesday will begin up to two days of questioning the prosecution and defence in President Donald Trump’s impeachment trial ahead of a crucial vote later in the week on whether to call witnesses.

The questions, which will alternate between Republican and Democratic senators, will be submitted in writing and read aloud by US chief justice John Roberts, who is presiding over the trial to determine if Mr Trump should be removed from office.

The questions can be directed at either the Democratic House prosecutors or Mr Trump’s legal team, and will take up to eight hours a day over Wednesday and Thursday. There is no time limit on the answers, which cannot be challenged by senators, Senate aides said.

The questions follow the conclusion of three days of opening arguments by each side in the trial on charges Mr Trump abused his office by pressuring Ukraine to investigate political rival Joe Biden, a Democratic presidential contender, and impeded a congressional investigation of the matter.

Once the questioning wraps up, the Senate is expected to turn on Friday to a debate and vote on whether to call witnesses in the trial.

The Republican president, who has denied wrongdoing and denounced the impeachment process as a sham, is expected to be acquitted in the Senate, where a two-thirds vote is required to convict and remove a president from office. No Republican has voiced support for his removal.

Democrats have pushed for witnesses including former national security adviser John Bolton, whose explosive allegations in an unpublished book manuscript about Mr Trump’s actions have increased pressure on wavering Republican senators to back witness testimony.

....many more mistakes of judgement, gets fired because frankly, if I listened to him, we would be in World War Six by now, and goes out and IMMEDIATELY writes a nasty & untrue book. All Classified National Security. Who would do this?

“A fair trial involves witnesses and it involves documents,” Adam Schiff, the lead Democratic prosecutor in the case, told reporters.

Republican senators met behind closed doors after Tuesday’s trial session to discuss calling witnesses, but said as they emerged there was no resolution on the matter. Four Republicans would need to vote for witnesses, along with all 47 Democrats and independents.

Senate majority leader Mitch McConnell told senators in the meeting that he did not currently have the votes to block Democrats from calling witnesses at the trial because some Republicans remained uncommitted, several media outlets reported.

Republican senator Kevin Cramer, a conservative defender of Mr Trump who opposes calling witnesses, told reporters afterwards that Republicans were “mostly united” against witnesses, but added: “I’m pretty sure it’s not unanimous. But I don’t know what the numbers are.”

Mr Trump said on Twitter on Tuesday night that “no matter how many witnesses you give the Democrats, no matter how much information is given,” they will never be satisfied. “They will always scream UNFAIR.”

The Democratic-controlled House of Representatives impeached Mr Trump in December on two charges in the Ukraine matter, setting the stage for the trial in the Republican-led Senate on whether to remove him from office. It is the third Senate presidential impeachment trial in US history.

Mr Trump’s legal team wrapped up its opening arguments on Tuesday, calling for a quick acquittal of the president and accusing Democrats of trying to poison Trump’s re-election bid in November and overturn the 2016 election.

“It is time for this to end, here and now,” White House Counsel Pat Cipollone told the Senate.

Mr Bolton wrote that the president told him he wanted to freeze $391 million in security aid to Ukraine until Kiev pursued investigations into Democrats, including Mr Biden and his son Hunter Biden, the New York Times reported.

Mr Trump has denied telling Mr Bolton he sought to use the Ukraine aid as leverage to get Kiev to investigate the Bidens. – Reuters