The Republican-controlled US Senate has rejected Democratic efforts to request a subpoena seeking the testimony of former US national security adviser John Bolton in Donald Trump's impeachment trial. Video: Reuters 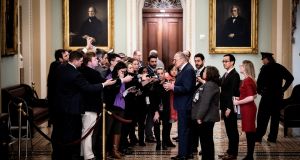 Senate minority Leader Chuck Schumer talks to reporters during a break in the Senate impeachment trial of US president Donald Trump at the Capitol in Washington on January 21st, 2020. Photograph: Erin Schaff/The New York Times

US senators clashed over the rules governing US president Donald Trump’s impeachment trial on Tuesday night, as the first full day of the trial evolved into a marathon session.

In an unexpected move, Democrats tabled 11 amendments to the resolution setting out the trial’s rules, forcing the US Senate to vote several times on whether to subpoena documents and witnesses over more than a 12-hour period.

In an increasingly fractious debate as the evening wore on, Senate democratic leader Chuck Schumer tabled several amendments – including requests for acting White House chief of staff Mick Mulvaney and former national security advisor John Bolton to testify, and for the White House, state department and defence department to release relevant documents to the trial. While the amendments were defeated, it allowed Democrats to read into the record hours of damaging information about Mr Trump’s activities in Ukraine. Most of the amendments were defeated along party lines, with the chamber’s 53 Republicans voting against and 47 Democrats voting in favour, with the exception of one vote which saw senator Susan Collins of Maine vote with Democrats.

In a sign of the lack of communication between the Senate’s top Republicans and Democrats, Senate majority leader Mitch McConnell appeared to be taken by surprise at the strategy employed by Democrats.

While Mr Trump is expected to be ultimately acquitted because the Senate is unlikely to reach the two-thirds majority needed to convict him, Democrats are hoping that a handful of Republicans could break with their party and accede to Democrats’ request that witnesses and documents are subpoenaed during the trial.

Though no Republican broke ranks on Tuesday, earlier in the day there were signs that Mr McConnell was facing pressure from some within his own party. At the start of proceedings, he said that the 24 hours allocated to each side for opening arguments could take place over three days rather than two days as he initially favoured, following calls from at least one Republican, Ms Collins. He also reversed course on an initial plan not to immediately include House of Representative evidence, agreeing that the material from the House impeachment inquiry would be included.

Towards the end of the session, chief justice John Roberts intervened and admonished both legal teams “in equal measure” about how they were addressing “the world’s greatest deliberative body”.

“I do think that those addressing the Senate should remember where they are,” he said, following sharp exchanges between House judiciary chairman Jerry Nadler and Mr Trump’s legal team.

Mr Trump issued a flurry of tweets and re-tweets early on Wednesday morning from Davos, Switzerland, as the trial continued on Capitol Hill past midnight.

Mr Trump’s Senate trial – only the third presidential impeachment in US history – follows his impeachment by the Democratically-controlled House of Representatives in December.

Democrats accuse the president of abusing the power of his office by pressuring Ukraine to investigate his political rival Joe Biden, and his son Hunter, who served on the board of a Ukrainian gas company while his father was US vice-president. They also argue that Mr Trump withheld already-sanctioned military aid from Ukraine as part of a quid pro quo in order to convince the Ukrainian president to publicly announce investigations.

With the Senate trial due to continue on Wednesday, Mr Mc Connell is proposing a break-neck timetable over the coming days and weeks, with the aim of finishing the trial before Mr Trump’s state of the union address to congress on February 4th. The possibility of a two-week trial contrasts with Bill Clinton’s impeachment trial in 1999 which lasted for five weeks.

While Democrats have called for witnesses to be called, Mr McConnell has said that a vote on this will be held at a later process in the trial. Any move to subpoena witnesses could lead to a significantly more lengthy trial.

Outlining the resolution setting out his proposed procedures in the chamber earlier on Tuesday Mr Mc Connell said that the structure was “fair, even-handed and tracks closely past precedents”.

But senate minority leader Mr Schumer denounced the process as “a rushed trial with little evidence, in the dark of night, literally the dark of night,” referring to the expectation that senators will sit well into the evening on each day of the trial. Claiming that the rules seemed to be designed “by president Trump for president Trump” he said the trial was “nothing short of a national disgrace” and “one of the darkest moments in Senate history”.

In his opening statement, White House counsel Pat Cippolone said there was “absolutely no case” against Mr Trump, arguing that “the president has done absolutely nothing wrong”. But Democratic commentators were quick to seize on some of his comments as misleading.

Mr Cippolone claimed that the Mueller Report into Russian election interference had found “no obstruction” by the president, when in fact Mr Mueller, the special counsel, did not exonerate the president on this charge.

Adam Schiff, one of seven House impeachment managers selected to represent House Democrats in the trial, set out the prosecution case in his lengthy opening statement. Displaying messages and clips with direct quotes from the president, Mr Schiff said that Mr Trump clearly believes “he can do anything he wants, no matter how corrupt”. He argued that the president’s behaviour was “precisely the kind of conduct” America’s founding fathers had in mind when they included an impeachment provision in the constitution.

He also took issue with Mr Cippolone’s opening statement, noting that he had not even tried to defend Mr Mc Connell’s organising resolution which does not call for witnesses. There was “no defence of the McConnell resolution” because it was indefensible, he said. “No trial in American has ever been conducted like that,” he said.

The Senate trial is due to last at least a week, though Mr Trump is ultimately expected to be acquitted given that a two-thirds majority is needed to convict him.