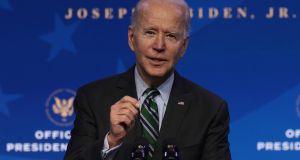 When Joseph R Biden becomes the 46th US president on Wednesday, he will rival John F Kennedy as the most Irish-American president ever. Indeed, Biden may be more typically Irish-American than the patrician JFK. His Finnegan and Blewitt forebears toiled in the factories and mines of industrial America where many working families wore their Irish identity as a badge of pride.

In addition to his ancestry, Biden comes to the presidency with a commendable record of engagement on Irish affairs. Irish diplomats will have an excellent opportunity to further channel this goodwill towards the consolidation of peace and reconciliation in Ireland.

I first met Senator Biden in Washington in 1981 during Ronald Reagan’s first term. He struck me not simply as a dealmaker but also as an innovative thinker. His Pennsylvania background helped him recognise quickly Reagan’s appeal to disaffected blue collar ethnic voters. He also emerged as someone who wanted to help end the violence in Northern Ireland.

Reagan’s first term coincided with a prolonged period of disarray in Anglo- Irish relations. This was particularly challenging in the US both in the light of the hunger strikes and the high profile alliance between Reagan and Thatcher. It was also a time of regrouping and reappraisal on Irish issues.

This was marked in Washington by the formation of the Friends of Ireland, a broad-based congressional body dedicated to peace in Northern Ireland. Together with Ted Kennedy and Tip O’Neill, Joe Biden was a founding father. He made a point of recruiting as his advisers young Americans with close contacts in Ireland.

The hunger strikes highlighted the intolerable dysfunction within Northern Ireland and the urgent need for fundamental reform. Senator Biden and the Friends of Ireland called for a comprehensive restructuring of the whole framework of Anglo-Irish relations and asked the Reagan administration to assist. This harmonised with the new thinking of John Hume and others in Ireland which found expression in the New Ireland Forum.

The forum undertaking won widespread favour in the United States. Through the initiative of the Friends of Ireland, both Houses of Congress unanimously passed a resolution applauding the forum outcome and requesting the British government to respond constructively. This was an historic breakthrough. All the more unexpected, therefore, was the political earthquake of Margaret Thatcher’s intemperate ‘out, out, out’ speech in 1984 dismissing the three alternative structures proposed by the forum.

Reagan, in the face of sustained pressure from Congress, was left with no alternative but to intervene. This helped inaugurate a new phase of Anglo-Irish negotiations which led to the landmark Anglo Irish Agreement of November 1985.

Following the agreement, Biden led the efforts in the Senate to establish an international fund for Ireland to underpin the accord. He resisted attempts to dilute the funds’ potential and successfully secured its passage. Biden maintained this same vigilance in later years on human rights, extradition and in nurturing the peace process.

In recent months Joe Biden’s lifelong interest in Ireland has returned to the fore. His invocation of Seamus Heaney’s The Cure at Troy following his election received worldwide attention. Similarly, his reminder that the Good Friday Agreement necessitates open borders was timely and decisive. There has been speculation also about his possible early appointment of a new ambassador and reports of his support for immigration reform. Beyond this, what can Ireland expect from the new president?

Politically, the new president will steadfastly defend the Good Friday Agreement, one of the great American foreign policy successes, against any undermining by Brexit. He will follow keenly the debate on Irish unity, while carefully avoiding taking sides. Above all, he will emphasise the priority of political reconciliation and North-South co-operation and appoint a “special envoy” well versed in Northern Ireland affairs.

Economically, Biden fully understands the role of the United States in investment and job creation in Ireland. As a co-author of the international fund, he may be open to calls for its redesign and enlargement to facilitate economic growth in Northern Ireland and reignite cross-Border partnership, especially necessary following Brexit.

Culturally, Joe Biden prizes the Irish achievement in the arts; and is eloquent about the yearning many Irish-Americans have for closer cultural contact with Ireland. His home state Pennsylvania is writ large in the history of both Irish traditions. This is an area where he could leave a legacy by providing new opportunities for the Irish in America, and the two traditions here to collaborate in exploring and enriching our common heritage.

The task before president Biden is Herculean: his predecessor fomented turmoil and division at home and overseas. While Ireland may not be one of the immediate priorities, the people of Ireland can hope with good reason that the inspiration of Seamus Heaney and the courage of his Irish ancestors will fortify president Biden as he sets out to heal the United States.

Jim Sharkey was political counsellor in the embassy in Washington between 1980 and 1985. He was subsequently ambassador to Russia, Japan and Australia.