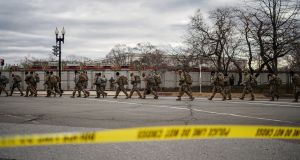 On this day 12 years ago, long before dawn and in sub-freezing temperatures, I walked alongside a tidal wave of humanity making its way through the streets of Washington DC. They were there , I wrote at the time, “to reclaim the US capital for all the people of America”.

How naive was I? Criminally.

But as that exuberant, wildly diverse crowd skipped and sang their way to the National Mall, then wrapped themselves in blankets and settled down close to the giant screens amid iconic architectural symbols of America, it felt like the end of history.

There are lessons for everyone; for political parties, for the media of course, and yes, for voters

This was not a crowd on a wild blow-out. The mission they were on was almost sacred. Many had endured 18-hour bus journeys, shared bunk beds in cheap lodgings 100 miles away, had risen at 3am to begin the long, icy trek from the drop-off point.

When president-elect Obama finally appeared on screen triggering a frenzy of flag-waving, chanting, foot-stomping and choking sobs, a woman beside me fell to her knees, thanking God that this moment had not been snatched from them “by an assassin’s bullet”. Assassination had been an unspoken but real dread in the days before, particularly among civil rights veterans and visitors from the south. (Obama received three times the number of threats than previous presidents during his candidacy and first year in office. Anti-government “militias” which had dropped to 131 under George W Bush rose tenfold when Obama took office).

A woman from Selma, Alabama exclaimed, “We heard freedom ring” as he took the oath. She later chatted frankly about the problems within her own black community but saw this day as a new beginning.

Why would she not? Here was America’s new, eloquent, energetic young president, a man of colour, talking about the challenges, the hard graft and sacrifice that lay ahead but reminding them of what was possible, how a man like him “whose father less than 60 years ago might not have been served at a local restaurant can now stand before you to take a most sacred oath”.

As the screens captured the traditional high symbolism of the now former president being escorted to a helicopter by the newly-installed president (which will not happen today due to Trump’s sulking), there was the odd triumphalist roar, but not much more. It felt like America had taken a pause to exhale.

As we know now, much of America had taken a pause to reload.

I was naïve. So was half of America. Twelve years ago there was this nice, liberal notion that the other half might pause to listen, to give this thoughtful, educated new man a chance. It never happened.

Obama believes his election opened a wave of bitter and divisive turmoil that fuelled Republicans’ obstructionism and ultimately changed the party. “It was as if my very presence in the White House had triggered a deep-seated panic, a sense that the natural order had been disrupted,” he wrote in his memoir. “Which is exactly what Donald Trump understood when he started peddling assertions that I had not been born in the United States and was thus an illegitimate president. For millions of Americans spooked by a Black man in the White House, he promised an elixir for their racial anxiety.”

Just a year after his inauguration, polls suggested that only four in 10 voters who identified with the Tea Party movement believed that he was born in the US.

And of course, the Republican Party fell happily into the extremists’ embrace. In the 230 years between the ratification of the US Constitution and Obama’s election, opposition parties had blocked a total of 68 presidential nominees. In fewer than four years under Obama, Republicans had blocked 79 of them – over half the historic total.

We had been warned. Wise old hands had signalled that the myths and lies were too deeply ingrained to be shifted so easily. If memories of that bright, joyous morning 12 years ago now come tinged with nausea, it’s hardly surprising.

What have we learned? That the future is unknowable. Who on that hope-filled morning 12 years ago anticipated Sarah Palin’s elevation as the template for Republican politicians? Then again who was aware of a dynamo called Stacey Abrams, whose long-game strategy with numerous other Black women to increase turnout among Georgia’s Black, Latino and Asian voters would lay the groundwork for Biden’s victory and crucial Democrats’ Senate wins and expose Trump in every facet of his twisted being?

Given a hint of how it would end, would Republicans have descended the Trump elevator to white supremacist terrorism? Would Democrats have adopted different tactics ?

The wise old hands know there is no fairytale ending to this version of American Psycho. If what America needed was a deep churn and exposure to the light, perhaps the catastrophic Trump experiment was not entirely wasted.

There are lessons for everyone; for political parties, for the media of course and yes, for voters. All had a role in summoning up, empowering, and enabling Donald Trump despite knowing precisely who and what he was. Many profited from him. Can they even begin to estimate the cost?

In many ways, yesterday’s New York Times headline crystallised the depth of the abyss: “Pentagon Accelerates Effort to Root Out Far-Right Extremism in the Ranks”.

The best of Irish to President Joe Biden and vice-president Kamala Harris.

May their dream of unity never falter.