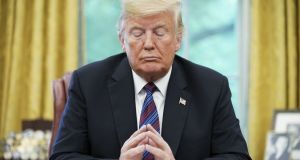 When he formally relinquishes power on Wednesday, Donald Trump will leave behind a country reeling from the devastating fallout from his misrule. Photograph: Mandel Ngan/AFP via Getty Images

After four chaotic years, it was the final public act of the Trump presidency that gave us its abiding image. The violent storming of the US Capitol by a mob of Trump supporters was not an aberrant coda but a fittingly ignominious ending that will define the Trump era. This is his legacy: a deeply riven country where a president’s flagrant lies incite a horrific assault on the heart of the democratic system.

When he formally relinquishes power on Wednesday, Trump will leave behind a country reeling from the devastating effects of his misrule. He did not create America’s divisions, least of all its fissures over race. He did not cause the Covid-19 pandemic. Nor is he to blame for his country’s dangerous levels of inequality. He did not invent the technologies that have injected poison into democratic debate. But Trump took the hand he was dealt and made things a great deal worse. His incompetence as a leader and as an administrator were in some instances a useful brake on his more reckless instincts. In the case of the pandemic, which will have killed almost 400,000 Americans by the time he leaves office, his failures have cost many of his compatriots their lives.

Instead of recognising his country’s divisions as the grave threat they are, he saw them as an opportunity. So he stoked them, winking towards America’s darkest instincts and feeding off the toxic energy he released.

The Trump presidency ends with a lie – that of the “stolen” election. But the original lie was the idea that Trump had any interest in improving the lot of America’s struggling working class. In power he undermined access to healthcare, gave tax cuts to the wealthy and dropped any plans for a major infrastructure investment programme.

A president who showed little interest in governing instead fell back on a phoney patriotism, yet that too was undermined by his words and actions. He coddled dictators, tore up plans to avert climate disaster, scuppered a deal that contained Iran’s nuclear ambitions and sacked public servants who put loyalty to institutions over fidelity to himself. His legacy is, in every sense, one of destruction. He knew how to break things, but not how to build, to create or even to imagine better.

For many Americans, the sight of Joe Biden taking the oath of office on Wednesday will mark the end of a nightmare. They rightly celebrate the fortitude of the institutions that held up against the onslaught of the last four years. But the Trump legacy will not be so easily undone. America’s standing has been badly damaged. Its rivals are emboldened, its allies’ trust has been shaken. Its democracy is in a moment of real peril.

Trump has been defeated. The Democrats have performed a clean sweep in Washington. But as the country kicks at the embers of the fire Trump lit four years ago, the scale of the reconstruction job is only just beginning to sink in.