Government seeks details on whether illegal Irish can leave US 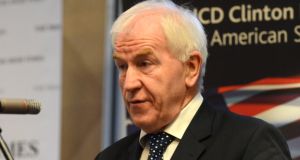 Minister for the Diaspora Jimmy Deenihan has said he did not think Republicans, who control the US Congress following their victories in November’s midterm elections, would be able to stop US president Barack Obama’s orders shielding four million illegal immigrants from deportation. File photograph: Cyril Byrne/The Irish Times

The Government is still trying to clarify whether illegal Irish will be able to return home outside of emergencies under President Barack Obama’s recent immigration orders, Minister for the Diaspora Jimmy Deenihan has said.

On a visit to Washington DC, the Minister said he didn’t think Republicans, who control Congress following their victories in November’s midterm elections, would be able to stop Mr Obama’s orders shielding four million illegal immigrants from deportation.

Republicans in the House of Representatives have voted to block the president’s immigration orders from November, but their Bill is unlikely to secure the 60 votes required in the Senate to overturn them.

The president bypassed Republican opposition with orders that lift the threat of deportation from the parents of US-born citizen or legal permanent residents. It’s estimated that thousands among the Government’s estimate of 50,000 illegal Irish in the US will benefit.

Speaking in between meetings with high-ranking House Republicans and Democrats, Mr Deenihan said so-called undocumented Irish should start preparing the paperwork required to avail of the temporary relief from deportation afforded by Mr Obama.

He said it would be premature to say that qualifying illegal Irish would be able to return freely to Ireland before the Irish Ambassador to the US, Anne Anderson, receives clarification from the State Department on the circumstances under which eligible immigrants could travel.

“That is what we want of course to result from the actions, but I don’t want to be building up people’s hopes yet,” he said.

Mr Deenihan said there may be other US legislation coming up in relation to the proposed E3 working visas for the Irish. These visas were contained in a comprehensive immigration Bill that passed a Democrat-controlled Senate in 2013, but stalled in the Republican-led House.

During his visit to Washington, the Minister met senior Republicans including Paul Ryan, the 2012 vice-presidential candidate and chairman of the powerful House Ways and Means committee.

The Wisconsin congressman, whose ancestors hail from Kilkenny, told him he intends to visit Ireland with his family in April.

Mr Deenihan said the Government was looking to develop influential contacts in the Republican Party.

“They hold the reins of power here and I think we have to nurture those contacts at this point,” he said.