Backlash against Trump intensifies after president’s comments on Virginia violence 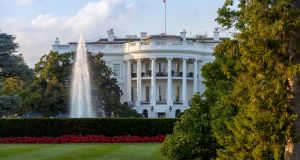 Former US presidents George HW Bush and George W Bush have issued a joint statement that condemns “racial bigotry, antisemitism and hatred” as Donald Trump faced a growing backlash over his defence of people who took part in the far-right rally in Charlottesville, Virginia.

The father and son did not mention the president by name, but their rare combined intervention came after Trump’s comments that “there is blame on both sides” for the deadly violence that erupted in Charlottesville on Saturday.

“America must always reject racial bigotry, antisemitism and hatred in all its forms,” the Bushes said in a statement, going on to cite the third US president, Thomas Jefferson, who lived near Charlottesville.

“As we pray for Charlottesville, we are reminded of the fundamental truths recorded by that city’s most prominent citizen in the Declaration of Independence: we are all created equal and endowed by our Creator with unalienable rights. We know these truths to be everlasting because we have seen the decency and greatness of our country.”

Republicans are facing intense pressure to denounce Mr Trump, who drew a moral equivalence between the white supremacists and what he branded the “alt-left”.

The Republican senator Lindsey Graham of South Carolina issued the strongest rebuke so far. “Mr President, I encourage you to try to bring us together as a nation after this horrific event in Charlottesville,” he said. “Your words are dividing Americans, not healing them.”

Mr Graham, a frequent Trump critic, highlighted the death of counter-protester Heather Heyer. “Through his statements yesterday, president Trump took a step backward by again suggesting there is moral equivalency between the white supremacist neo-Nazis and KKK members who attended the Charlottesville rally and people like Ms Heyer. I, along with many others, do not endorse this moral equivalency.

“Many Republicans do not agree with and will fight back against the idea that the Party of Lincoln has a welcome mat out for the David Dukes of the world.”