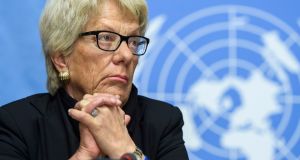 Carla del Ponte, who has resigned from the UN commission investigating war crimes and violence against civilians in Syria. Photograph: Martial Trezzini/Keystone/ AP

UN secretary-general António Guterres continues to support the work of the UN commission investigating war crimes and violence against civilians in Syria, although prosecutor Carla del Ponte has resigned.

She blamed her decision on the lack of backing from the Security Council, which has neither established a special tribunal to try perpetrators of alleged crimes in Syria nor referred the situation in Syria to the International Criminal Court (ICC).

“I have no power [as a prosecutor] as long as the Security Council does nothing. We are powerless, there is no justice for Syria,” she stated when announcing her resignation. She accused the Syrian government of perpetrating terrible crimes against humanity and using chemical weapons, and argued the opposition was “now made up only of extremists and terrorists”.

Having served as prosecutor for tribunals dealing with atrocities in Rwanda and the former Yugoslavia, she insisted crimes committed in Syria were far greater than in those two countries. “We thought the international community had learned from Rwanda,” she said, referring to the massacre of up to a million minority Tutsis and moderate Hutus by government-sponsored Hutu tribesmen.

The Syria commission was created on August 22nd, 2011, to investigate human rights violations by the Syrian government and rebel and foreign forces. The original and surviving members are Brazilian lawyer Paulo Sérgio Pinheiro and former chief of the UN agency caring for Palestinian refugees, Karen Koning AbuZayd, a US citizen.

They were joined in September 2012 by Ms del Ponte, a former Swiss attorney general as well as international prosecutor. Since then the commission, barred from entering Syria, has collected thousands of interviews from Syrians outside the country as well as documents, medical reports and videos, and has compiled a secret list of suspected war criminals. Commission reports contain allegations of torture, rape, starvation, bombings of civilian areas and executions.

The public focus of the commission’s work has been on the government’s harsh crackdown on dissidents and suppression of the insurgency dominated by al-Qaeda offshoots and allies since 2013. The May 2014 attempt by the Security Council to secure referral of Syria to the ICC was vetoed by permanent members and Syrian regime supporters Russia and China.

The veto has also served the interests of all actors embroiled in the brutal and endless Syrian conflict, which do not want to be hauled before either a special tribunal or the ICC. These include Turkey, Saudi Arabia, Qatar, the US, France, Britain and Germany, which support anti-government forces, and Russia, Iran, Iraq and Lebanon’s Hizbullah, which are allies of the Syrian government.

When joining the commission, del Ponte had promised to hold all those involved responsible for their actions.

Syria’s civil conflict and international and regional proxy wars have killed an estimated 300,000 and driven 10 of the 23 million Syrians from their homes.