Kenyan opposition leader to go to court over disputed election 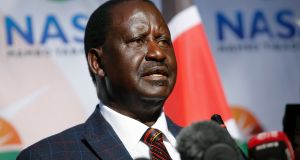 The leader of Kenya’s opposition coalition, Raila Odinga, during a news conference in Nairobi on Wednesday. Photograph: Dai Kurokawa/EPA

Kenya opposition leader Raila Odinga said on Wednesday he would go to court over last week’s presidential election results, ignoring calls by some election observers that he concede defeat to President Uhuru Kenyatta.

About 24 people have died in violence since the August 8th election and Mr Odinga’s decision will likely ease concerns that he would call for demonstrations that might trigger further violence.

“We have now decided to move to the supreme court,” he said,” he told reporters in the capital Nairobi. “This is just the beginning, we will not accept and move on.”

The election board said on Friday that Mr Kenyatta had beaten Mr Odinga by 1.4 million votes to win a second five-year term. Mr Odinga disputes that figure. He has not yet provided proof of rigging but promised to do so in court.

The move to the judiciary will relieve Kenyans who feared a repeat of the violence that followed a 2007 vote, when Mr Odinga called for protests after a deeply flawed poll. The demonstrations sparked ethnic violence and around 1,200 people died.

Mr Odinga also contested – and officially lost – elections in 2013, but quelled potential violence by taking his case to court.

Judges eventually ruled that much of his evidence was being submitted outside time limits set by the court, frustrating his supporters and sparking suspicion of the judiciary’s independence.

Mr Odinga emphasised in his speech that his decision did not mean he was giving up the fight.

“By going to court we are not legitimising misplaced calls from some observers for us to concede. We are seeking to give to those who braved the long lines in the morning chill and hot afternoon . . . a chance to be heard,” he said.