President Donald Trump on Tuesday (August 15th) said both sides were to blame in the clashes in Virginia over the weekend. 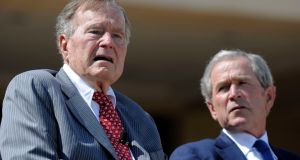 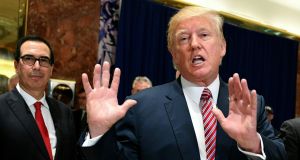 US President Donald Trump speaks to the press about protests in Charlottesville on Tuesday. Photograph: Jim Watson/AFP/Getty Images

Several leading members of Donald Trump’s Republican Party and key ally Britain sharply rebuked the US president on Wednesday after he insisted that white nationalists and protesters opposed to them were both to blame for deadly violence in the Virginia city of Charlottesville.

Mr Trump’s remarks on Tuesday, a more vehement reprisal of what had been widely seen as his inadequate initial response to Saturday’s bloodshed around a white nationalist rally, reignited a storm of criticism and strained ties with his own party.

Republican former presidents George H.W. Bush and George W. Bush were among those to join the debate.

Without mentioning Mr Trump, they said in a joint statement on Wednesday: “America must always reject racial bigotry, anti-Semitism, and hatred in all forms.”

The Senate majority leader, Mitch McConnell, issued a statement that also did not mention Trump by name but said “messages of hate and bigotry” from white supremacists, the Ku Klux Klan and neo-Nazi groups should not be welcome anywhere in the United States.

“We can have no tolerance for an ideology of racial hatred. There are no good neo-Nazis, and those who espouse their views are not supporters of American ideals and freedoms. We all have a responsibility to stand against hate and violence, wherever it raises its evil head,” McConnell said.

Mr Trump last week lambasted Mr McConnell for the Senate’s failure to pass healthcare legislation backed by the president, and did not dismiss the idea of Mr McConnell stepping down.

In his comments at a heated news conference in New York on Tuesday, Mr Trump said “there is blame on both sides” of the violence in Charlottesville, and that there were “very fine people” on both sides.

Ohio Governor John Kasich said there was no moral equivalency between the Ku Klux Klan, neo-Nazis and anybody else. “This is terrible. The president of the United States needs to condemn these kind of hate groups,” Mr Kasich said on NBC’s “Today” show.

A 20-year-old Ohio man said to have harbored Nazi sympathies was charged with murder after the car he was driving plowed into counter-protesters, killing 32-year-old Heather Heyer and injuring 19 others. Heyer was being remembered on Wednesday at a memorial service in Charlottesville.

In a gesture toward reconciliation,Mr Trump said in a tweet Wednesday, “Memorial service today for beautiful and incredible Heather Heyer, a truly special young woman. She will be long remembered by all!”

On Tuesday, appearing angry and irritated, Mr Trump maintained that his original reaction was based on the facts he had at the time. Blame, he said, belonged on both sides.

From there, the back and forth with reporters turned tense.

The violence erupted on Saturday after white nationalists converged in Charlottesville for a “Unite the Right” rally in protest of plans to remove a statue of Robert E Lee, commander of the pro-slavery Confederate army during the US Civil War.

Many of the rally participants were seen carrying firearms, sticks and shields. Some also wore helmets. Counter-protesters likewise came equipped with sticks, helmets and shields.

The two sides clashed in scattered street brawls before a car drove into the rally opponents, killing one woman and injuring 19 others.

Two state police officers also were killed that day in the fiery crash of the helicopter they were flying in as part of crowd-control operations.

“We must stand up against them. Every time. Everywhere,” he tweeted,

Addressing the melee for the first time on Saturday, Mr Trump denounced hatred and violence “on many sides.” The comment drew sharp criticism across the political spectrum for not explicitly condemning the white nationalists whose presence in the Southern college town was widely seen as having provoked the unrest.

Critics said Mr Trump’s remarks then belied his reluctance to alienate extreme right-wing organisations, whose followers constitute a devoted segment of his political base despite his disavowal of them.

Yielding two days later to mounting political criticism over his initial response, Mr Trump delivered a follow-up message expressly referring to the “KKK, neo-Nazis and white supremacists and other hate groups” as “repugnant to everything we hold dear as Americans.”

“Thank you President Trump for your honesty & courage to tell the truth about #Charlottesville & condemn the leftist terrorists in BLM/Antifa,” Duke wrote, referring to Black Lives Matter (BLM) and anti-fascists.

Democrats seized on Mr Trump’s latest words as evidence that he saw white nationalists and those protesting against them as morally equivalent.

Richard Trumka, president of the AFL-CIO labour federation representing 12.5 million workers, became the latest member of Mr Trump’s advisory American Manufacturing Council to resign in protest, saying, “We cannot sit on a council for a president who tolerates bigotry and domestic terrorism.”

In his remarks on Tuesday, Mr Trump also sympathized with protesters seeking to keep Lee’s statue in place but offered no equivalent remarks for those who favoured its removal.

“You had people in that group . . . that were there to protest the taking down of a very, very important statue and the renaming of a park from Robert E Lee to another name,” Mr Trump said.

Mr Trump also grouped former presidents George Washington and Thomas Jefferson, two of the nation’s founding fathers, together with Confederate leaders such as Lee, Jefferson Davis and Stonewall Jackson, who fought to separate Southern states from the Union, noting that all were slave owners.