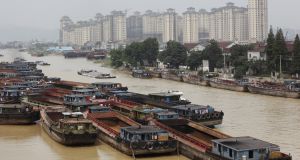 Cargo barges on a canal near the city of Huzhou – scene of the 1995 murders for which Liu Yongbiao has been arrested. Photograph: In Pictures Ltd/Corbis via Getty Images

In the introduction to his novel The Guilty Secret, Chinese writer Liu Yongbiao revealed he had already started work on a follow-up he hoped would prove a literary sensation: a suspense-filled, cold-case detective drama about a ravishing female author who evades capture despite committing a string of grisly murders.

He would call it The Beautiful Writer who Killed.

This week it emerged there could be more to Liu’s book project than mere fiction, after he was taken into custody for allegedly bludgeoning four people to death more than two decades ago.

“I’ve been waiting for you here all this time,” the storyteller reportedly told police when they appeared on his doorstep in east China in the early hours of last Friday.

According to the Chinese news website Sixth Tone, Liu was admitted to the China Writers’ Association in 2013 and had one book, a work of historical fiction, turned into a 50-episode television series.

In the preface to his second to last novel, The Guilty Secret, Liu told readers his ambition was for The Beautiful Writer who Killed to also be adapted for the big screen.

But now it is alleged that the defining moment in his life – and those of the four victims – came on the night of November 29th, 1995.

Police believe Liu was one of two men who checked into a guesthouse in the eastern city of Huzhou in order to rob its guests. When one victim, named as Mr Yu, fought back against the thieves, he was beaten to death. In order to conceal their crime, the two men are alleged to have murdered the couple who ran the guesthouse and their 13-year-old grandson.

Xu Zhicheng, one of the officers involved in the original inquiry, told the Paper, a Shanghai-based news website, the manhunt had gone cold because investigators could find no link between the victims and their killers. “This was the most difficult thing. We found it hard to follow the vine all the way to the melon,” Xu said.

However, earlier this summer, almost 22 years after the crime, investigators caught a break that helped them identify Liu and a 64-year-old man, named only as Wang, as prime suspects.

While police did not fully explain how they had tracked down the two men, the Paper reported that advances in DNA technology had played a role in their capture.

The China Daily said that in their quest for justice, investigators had analysed about 60,000 fingerprint samples.

Liu never did publish The Beautiful Writer who Killed and now looks set to pen his next work behind bars. Already, though, the author-cum-homicide-suspect has found time to compose a one-page letter to his wife, apparently confessing his real-life crimes.

According to Chen Hongyue, one of the arresting officers, Liu told his wife he had spent more than two decades waiting for the police to come calling. “Now I can finally be free from the mental torment I’ve endured for so long,” he reportedly wrote.

The case is reminiscent of that of the Dutch crime writer Richard Klinkhamer, whose wife, Hannelore, vanished in 1991.

Following her disappearance, Klinkhamer unsuccessfully attempted to interest his publisher in a gruesome novel in which he pondered seven ways he could have killed her, including, most disturbingly, mincing her remains and feeding them to pigeons.

Nine years after she disappeared, Hannelore’s skeleton was found under the couple’s former home and Klinkhamer confessed to her murder.

His book was later published as a work of what one Dutch newspaper called “intriguing” non-fiction.